It’s one of history’s great rivalries. The intriguing story of Elizabeth I and her cousin Mary Stuart certainly has all the elements of a great movie – war, intrigue, family ties and treachery. But while Josie Rourke’s feminist retelling of the tale in Mary Queen of Scots hits the high points, it strays from the historical path to an extent that will probably infuriate many.

Screenwriter Beau Willimon (House of Cards) adapts John Guy’s book My Heart is My Own: the Life of Mary Queen of Scots for the screen. The book itself was controversial because it speculated an event (which is critical to the film, so I won’t detail it) for which no historical evidence currently exists. The filmmakers have taken several other liberties with the historical record too; some more outrageous than others. So this is definitely not a film for history purists; nor is it likely to be one for history students. So film doesn’t want to be a documentary. But the problem is if you’re going to call your film Mary Queen of Scots, most, if not all, your audience will be expecting something at least close to the historical record. 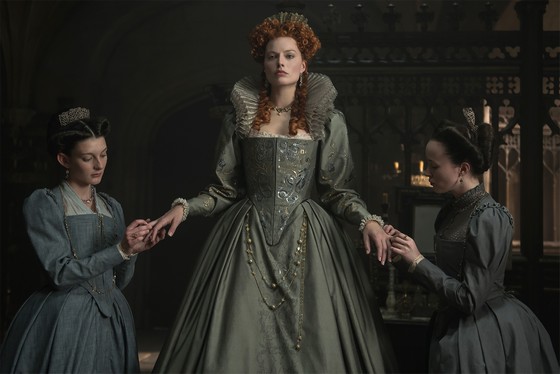 In 1561, Mary Stuart (Saoirse Ronan) returns to Scotland from France, where she had lived since she was a toddler. The Catholic queen arrives to reclaim her throne following the death of her father. But she finds a country deeply divided. Protestants and Catholics are jostling for power. Determined to be even-handed, Mary dictates freedom of worship, but it doesn’t really help her. The Catholics see it as capitulation, and Protestants won’t accept her as monarch whatever concessions are made.

Meanwhile, in England, Elizabeth I (Margot Robbie) is eying Mary’s return with suspicion. As a Stuart, Mary has at least as good a claim as Elizabeth to the English throne – perhaps even better. Elizabeth’s key adviser, William Cecil (Guy Pearce) – a fierce anti-Catholic – warns her against making any concessions to Mary; even though the two women are cousins. Elizabeth thinks she has a solution – by marrying Mary (who’s recently been widowed) to an English noble. She decides to offer up her personal favourite – and perhaps lover – Lord Dudley (Joe Alwyn) as Mary’s suitor.

Volumes have been written about the political machinations between England and Scotland from the time – and their ripples affect the UK even today. Much has also been written about the relationship between Mary and Elizabeth which underpinned those machinations. Rourke does a good job in conveying the causes of the strife – which sadly come back to religious squabbles. But the film isn’t so interested in the politics as the relationship – mostly at a distance – between the two queens. Much of their communication is either by go-betweens or by letters. While Rourke deftly conveys the depth of the feeling between them, I’m not sure the central premise about their relationship really catches fire.

The film meditates on powerful women, and particularly how men react to such women. Although Mary and Elizabeth are all but absolute rulers, the Machiavellian scheming of the men around them constantly undermines their will (something, incidentally, also touched on in The Favourite). It does however drag in places, and sometimes the Byzantine plotting is difficult to follow.

John Mathieson (Logan) does an excellent job recreating what seems to be a reasonable facsimile of the 16th Century. His work on a critical battle scene is breathtaking. Max Richter provides his usual understated scrore; while Alexandra Byrne fashions some wonderful costumes.

Saoirse Ronan (Lady Bird) is excellent in the title role. Her full-blooded commitment to the role is garnering nominations for a number of awards, despite some anachronisms in the character; and an odd choice of accent. Margot Robbie (I, Tonya) has a more thankless task as Elizabeth. Unlike Ronan, she doesn’t get any flashy action sequences. She pretty much has to make do with dialogue scenes, which limit her opportunities. That said, I thought she was fine in the role but its constraints make her character difficult to like. Guy Pearce (Swinging Safari) and David Tennant (Jessica Jones) get prominent supporting roles as religious zealots; but Joe Alwyn (Boy Erased) and Jack Lowden (Dunkirk) are rather bland as Mary’s suitors.

Mary Queen of Scots is a real mixed bag. It’s nowhere near accurate enough to serve as historical drama; and if that’s what you want, well, you’ve been warned. But if you like political intrigue for its own sake, you’ll probably enjoy it.