In the 1950s, Biblical films were extremely popular. Sweeping epics like the Oscar-winning Ben Hur and the spectacular The Ten Commandments scoring at the box office. These stories featured timeless themes of good versus evil. But in the 60s, their popularity seemed to wane. More modern takes on Bible stories have tended to be revisionist, like Martin Scorsese’s The Last Temptation of Christ and Darren Aronofsky’s Noah. Mel Gibson’s violent and visceral The Passion of the Christ however proved a huge box office hit. In most of those stories, Mary Magdalene was a peripheral character at best. 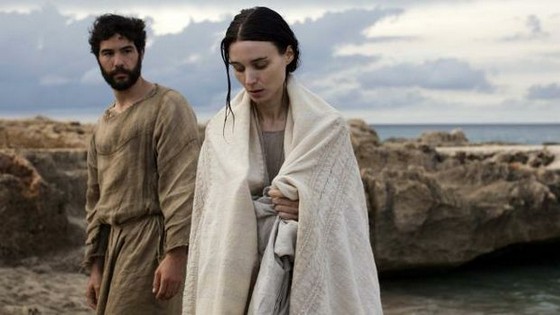 In popular mythology she was depicted as a prostitute; an idea propagated by Pope Gregory in 1591. This film goes some way to redressing that image as Mary Magdalene recounts the greatest story ever told from a feminine perspective.

When we first meet Mary (Rooney Mara) she lives in a small fishing village. Her views though have put her at odds with the rest of her family, who hold more traditional values. She then meets the travelling teacher Jesus (Joaquin Phoenix) and his band of disciples. They’re travelling across the country urging rebellion against the Roman Empire. She follows them across the windswept plains and deserts to Jerusalem, where Jesus meets his fate. The film follows her own spiritual journey as she becomes his only female apostle.

Rooney brings a quiet, ethereal quality to her portrayal of Mary, and her performance gives us a new take on the familiar figure. Phoenix has a solemn and intense presence as Jesus, but he mumbles his way through much of the dialogue. The international cast also includes Chiwetel Ejiofor, who leaves a strong impression as Peter, while Tahir Ramin (A Prophet) gives us a rather conflicted Judas Iscariot.

Mary Magdalene offers a feminist take on the traditional story of Jesus. It comes across as a Biblical-era tale of female empowerment. Two female writers – in Helen Edmundson and Philippa Goslett – penned the script. This is the first feature script from Edmundson, who has written extensively for television and the stage. Goslett has written for films such as the quirky How to Talk to Girls at Parties. They take a few liberties with the Bible story.

Mary Magdalene is the sophomore feature from Australian filmmaker Garth Davis. His earlier film Lion has won praise from critics and garnered many awards. His direction here is solid, but the film is languidly paced for the most part, and rather dull. its technical aspects are excellent however. Greig Fraser provides gorgeous and evocative cinematography, as he captures the desolate windswept landscapes. His moody palette is mainly brown. Jacqueline Durran’s simple costumes are also evocative of the era.