A haunted mansion in the middle of suburban Melbourne. Who knew that was a thing in this town? The perfect venue for a creep show where things go bump in the night. It is about broken love and apparitions.

There is a back story, given to us by a narrator (Mike Snell) in the hallway once we have entered the grand house. Looking for a new start, recently widowed Mel Walker (Skylar Delphinus), her son Levi (Lukas White) and daughter Rachel (Shona Guiry) have just moved into the mansion. Little do they know they are stepping into a paranormal, torrid love story, laced with temptation, nightmares and heartbreak. Dealing with the grief of losing a loved one, suddenly they face evil, as demonic spirits are ever present … and the family starts to fall apart.

An audience of up to 30 at any one time is taken on an immersive journey during which we meet the inhabitants of this stately, two storey, 19th century home. Some are alive and others not. We witness distress and fear.

Mansion: The Experience melds performance art, dance, ballet, theatrics, burlesque, acrobatics and circus acts from 14 artistes (if you count the three who provide voice over talent) – several masked or heavily made up – in 11 spaces. These are mainly rooms within the vast expanse of the home, but also in a hallway, up the staircase and above that staircase.

We don’t talk. We are led into the mansion via a limping caretaker carrying a folded umbrella, played by the writer, director and producer of the show, Bass G. Fam (the man behind Matador). He accompanies us throughout – knocking the brolly on the wooden floor every time it is time to move along. We are also shadowed by a priest, a secretive man dressed in a black hooded robe and carrying what appears to be a religious book.

In the first room, it is clear that Mel Walker has lost the love of her life. Then, suddenly, popular tunes start playing and she and other members of the household are dancing. I am not convinced that first transition worked as seamlessly as it could have. It took a while to switch gears from what had happened – and what was said – immediately beforehand.

Few words are spoken by the lithe, muscular and energetic players throughout. It is mainly music and feats of strength, stamina and skill. Room 7 was undoubtedly my favourite. It is a bedroom and the young lady in it is destined to never get a good night’s sleep. Clowns can be scary creatures. I have heard of stray hands, but this is another thing altogether. 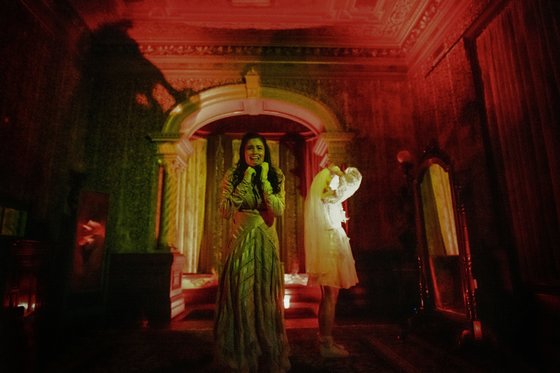 The inhabitants of the mansion do come out to play and you never know exactly where and when they are going to appear, so be prepared for a scare here or there. Having said that, Mansion: The Experience wasn’t anywhere near as frightening as I thought it could be. Still, it remains a largely enjoyable 90 minutes in a spectacular residence, although I thought the narrative arc could have been a lot clearer.

Mansion: The Experience is playing at Labassa Mansion, 2 Manor Grove in Caulfield North until 3rd November, 2019.