An infectiously entertaining, toe-tapping, hand-clapping production of Mamma Mia! has officially opened at the Princess Theatre. With a successful Sydney season under their belts, the cast of 24 and eight musos are well rounded performers … and it shows!

The fairy tale appeal of the story, along with the beloved ABBA music, make this a delightful crowd-pleaser. It’s loads of fun and, at times, very funny. There’s a real energy about the piece that taps into the audience’s excitement and lifts the spectacle to even greater heights. 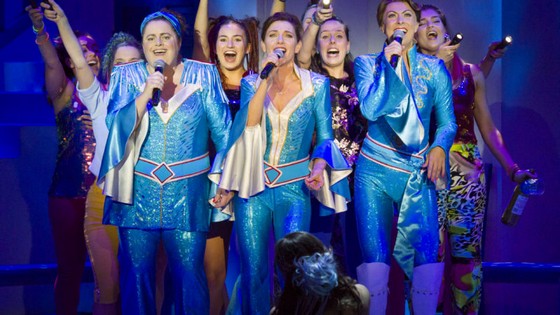 The story centres around a young bride-to-be, brought up by a hard-working single mum who runs a taverna on a Greek Island. Twenty-year-old Sophie (Sarah Morrison) is preparing to marry her fiancé, Sky (Stephen Mahy). Then she comes across her mother Donna’s (Natalie O’Donnell) diary from the 1970s. In it, she names three men – Sam Carmichael (Ian Stenlake), Bill Austin (Josef Ber) and Harry Bright (Phillip Lowe) – who could be her father.

So, without telling her mother, Sophie invites all of them to her wedding, hoping to discover which one is the dad who hasn’t been a part of her life all these years. Only, she words their invitations as if they came from her mum. What mum doesn’t know won’t hurt her, right? Plus, Sophie wants her dad there on the biggest day of her life. Let’s just say that as a result, the lead-up to her nuptials is not what anyone expected.

O’Donnell and Morrison do much of the heavy lifting and their vocal abilities are impressive. It seems only fitting that O’Donnell – who starred as Sophie in the original Australian production of Mamma Mia! – has come full circle to fill the pivotal role of Donna. Stenlake, Ber and Lowe, too, find opportunities to shine and seize them.

Donna’s back-up singers from days gone by, when they were known as Donna and the Dynamos – Tanya (Jayde Westaby) and Rosie (Alicia Gardiner) – are far from shabby in executing a few choice moves of their own. And talking of moves, Sky’s mates – Donna’s workers, Eddie (Alex Gibson-Giorgio) and Pepper (Sam Hooper) – individually and collectively generate howls of laughter. 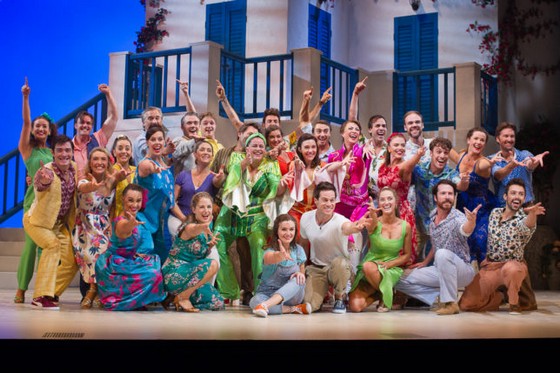 The choreography by Tom Hodgson is seamless and the staging built around a Greek taverna (set design is by Linda Bewick) most effective in setting the mood. Costumes, props, lighting and sound perfectly complement the narrative.

Next year will mark 20 years since Mamma Mia! first appeared in London’s West End. Since then, more than 60 million people have flocked to see it. I’m delighted to say the show retains all its charm. It still puts a smile on your face and a spring in your step. It is a happy, up-tempo celebration of love, laughter and friendship.

Truly triumphant, Mamma Mia! is well worth the price of admission. Directed by Gary Young, the musical – with 22 brilliant numbers – continues to shine. I see no reason the timeless tunes won’t resonate for many generations to come. Mamma Mia! is playing at the Princess Theatre in Melbourne until 30 September 2018.