Aristophanes’ classic Greek comedy Lysistrata is a comic account of women’s extraordinary mission to end the Peloponnesian War. They withhold sexual privileges from their men as a means of forcing peace talks. As an early exposé of sexual relations in a male-dominated society, it’s an apt source for Lysa and the Freeborn Dames. This new work by Claire Christian waves the feminist flag through a story of self-discovery, albeit with some stereotypes.

Bold first-year university student Lysa King (Tania Vukicevic) resents the traditions of her regional home town, most notably its annual rugby match known as the “war weekend”. On a trip home, she has an awkward reunion with once girlfriend Peta (Clementine Anderson). But bolstered by viewing women’s rugby marches,  she stages a protest to disrupt the “war weekend” as a mouthpiece of the #metoo movement. This angers most of the town, including her friends and her father (Hugh Parker) who is being awarded Man of the Year in one of the weekend’s rituals. 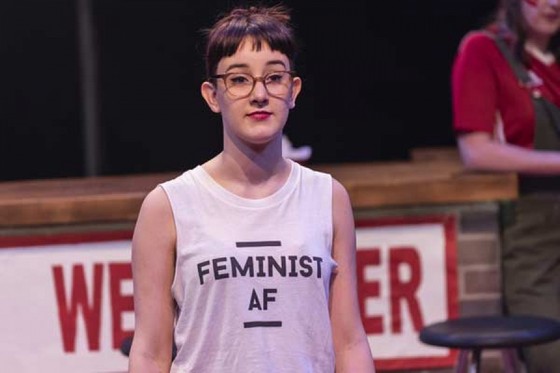 Rather than rallying the women of the town in solidarity with their international sisters, Lysa alienates almost everyone though her fired-up hostility. She locks local footy star Grant (Jackson Bannister) in the club’s locker room after he catches her hoisting a ‘Pussy Power’ flag over the hallowed footy field. The show revolves around this decision and its consequences.

The show’s recognisable “somewhere in regional Queensland” setting increases its accessibility. However, clearly its intent is to engage a younger demographic by showcasing impulsive protest as a privilege of youth; which may alienate traditional mainstage audience members. At times, it verges on caricature, overwhelming potentially poignant moments with over-the-top character portrayals. This makes it a frustrating experience; especially when any warning about the potential dangers of single-minded activism seems to be breezed over in its somewhat “all’s-well” ending.

It’s difficult to empathise with Lysa. Even though she has right on her side, her raging militancy is off-putting. She refuses to accept other viewpoints, which almost cost her close friendships. And although there are three male characters within the story, their responses to Lysa’s assertions appear as mere mentions, dismissed as being “part of the problem” rather than allowed space for consideration.

Obviously whether audience members will see passionate defiance or stubborn belligerence in Lysa will depend on their personal experiences. Thankfully, there’s a Greek chorus of freeborn dames (the all-wonderful Barbara Lowing, Roxanne McDonald, Hsiao-Ling Tang) to mix things up. The trio sets up the action, serving as Lysa’s persona oracle. But they also allow a reprieve from Lysa’s relentlessness, and provide a powerful presence in their punctuating reminder that feminism is not just for the young. In particular, Lowing’s monologue about legacy and  liberation conveyed a moving honesty that made the audience applaud mid-show. And the trio’s sardonic commentary also offers much dry humour.

Indeed, like its ancient source material, Lysa and the Freeborn Dames is very funny, thanks largely to its vibrant supporting cast. Prim and proper(ish) Miss Weekender (with sash to prove it), Esme (Tatum Mottin); and brash gutter-mouth Myra (Samantha Lush), bring an engaging energy to the at-times physical show, especially in its spirited “Wild Ones” dance scene. Also of note are Morgan Francis as the town’s caught-in-the-middle policeman and Hugh Parker as Lysa’s good-bloke father who, by his own admission, just doesn’t understand.

With provocation at its core, this is far from polite theatre. The show begins with a punch of profanities which continues for most of its duration. The words do become wittier as the show flows along, but its message sometimes lacks discernment. It touches on big themes like gender, sexuality and politics. There’s a lot going on and while sometimes it works, sometimes not so much. 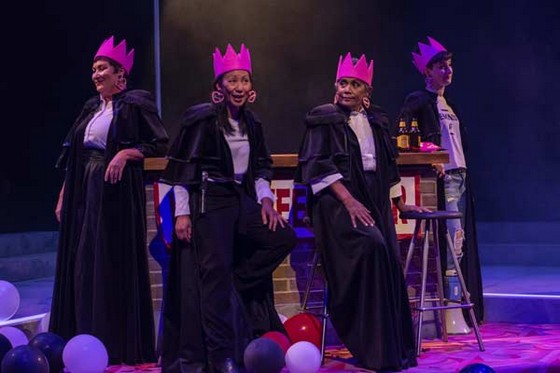 Turning an international lens on feminism in rural Australia makes for an interesting theatrical premise. But working toward social change that takes everyone into consideration is complicated. Probably for this reason, the show seems to lack a single thesis. Opportunities for discussion arise from this tangle, especially for its target school group audiences. This is the show’s real value, for as Lysa tells her father, “how is anything going to change if people can’t even have a conversation.”

One way or another, Lysa and the Freeborn Dames will evoke a response. Whether it will be frustration or fulfillment is up to the audience. But it will, as suggested by its “fury fuelled dramedy” descriptor, generate contemplation and conversation.

Lysa and the Freeborn Dames is at the La Boite Theatre, Brisbane until 11 August 2018.