Loro is a bloated two and a half hour indulgence that serves up pure unadulterated hedonism. Co-written and directed by Paolo Sorrentino (The Great Beauty), the film is about Italian media tycoon and politician Silvio Berlusconi (Toni Servillo) between 2006 to 2010. 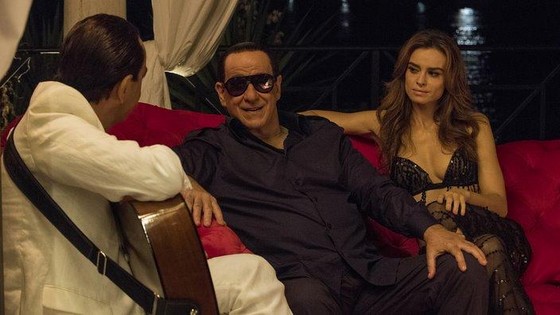 In this fictional account, Sorrentino speculates on what may or may not have taken place behind closed doors during a tumultuous period in Berlusconi’s career. Corruption, drugs and raucous pool parties feature heavily. The events take place as Berlusconi’s marriage to second wife Veronica Lario (Elena Sofia Ricci) fractures. Others either attempt to ingratiate themselves into his life or distance themselves from him.

Loro is commentary on the excesses of the power-hungry; and the conditions that allow them to flourish. The title of the film is Italian for “them”, but also a word play on l’oro, meaning “gold”. But several parts of the film feel repetitive. Many scenes are unnecessarily stretched. That includes far too much time spent on developing a Berlusconi acolyte character that leads nowhere, and with Berlusconi himself in various vacuous guises, such as that as real estate salesman. The whole sordid mess could have been covered more economically … and would have had more of a shot at sustaining interest throughout.

The scenes of excessive partying appear to have borrowed heavily from The Wolf of Wall Street, although the result is inferior. It often appears to be an excuse to show women uncovered. Although Berlusconi is looking to wrest back political office, precious little time in spent on politics. The whole thing is dealt with in a matter of minutes. The acting is nothing special as most of the characters are one-dimensional.

So, the script, direction and editing needed tightening, but most of all what was lacking was substance. I walked away bitterly disappointed, thinking I learned nothing that hasn’t already been splashed across the world’s media.