Based on the hoary chestnut of opposites attracting, Long Shot is a far-fetched comedy that, by and large, works. I dare say it will appeal to many fans of the two leads, Charlize Theron and Seth Rogen, because a) they’re in it and b) it is so unlikely a tale, born of the #MeToo generation. 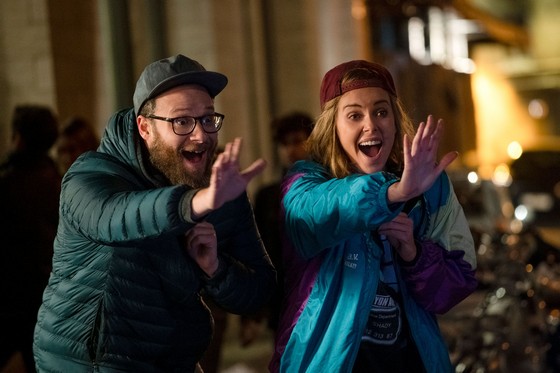 Charlotte Field (Theron) is one of the most influential women in the world. Smart, sophisticated and accomplished, she is US Secretary of State, a powerhouse diplomat with a talent for … well, almost everything. Fred Flarsky (Seth Rogen) is a gifted and free-spirited journalist with an affinity for trouble. The two have nothing in common, except that she was his babysitter and first crush, when he was 13 and she was 16. When Fred unexpectedly reconnects with Charlotte all these years later, he charms her with his self-deprecating humour and his memories of her youthful idealism.

As she prepares to make a run for the Presidency, Charlotte impulsively hires Fred as her speechwriter, much to the dismay of her trusted advisors. A fish out of water on Charlotte’s elite team, Fred is unprepared for her glamourous lifestyle in the limelight. However, sparks fly as their unmistakable chemistry leads to a round-the-world romance and a series of unexpected and dangerous incidents.

I wasn’t totally enamoured by the start of Long Shot, which I found rather heavy handed, childish and not really amusing. But once the relationship between Charlotte and Fred was established, the story definitely picked up a gear. Just don’t look for subtlety in a movie like this because you won’t find any.

I put a lot of credit for its success down to Charlize Theron. She’s such a good actress that she can make the implausible plausible. Seth Rogen is the rumpled bed loudmouth (although perhaps just a tad quieter than usual) he plays in most movies. This is the stuff of Hollywood, with plenty of irreverence thrown in for good measure.

One thing that did concern me a great deal was the affirmation of drug-taking that plays out in one extended sequence. Putting that – and my other slight misgivings – to one side, as a left-field romance true to its title, Long Shot contains some funny material. In among the obvious, there is also charm. Director Jonathan Levine (Warm Bodies) makes sure of that. It’s bound to do well at the box office.