Well, there’s always the “Disappointment of the year” award. I’m afraid this year Little Monsters will take this. I had regained confidence in the combination of horror and comedy after watching Monster Party and The Dead Don’t Die. I’ve always had a problem with it when moviemakers mix these two genres. But these last two films managed to rekindle my enthusiasm. Well, Little Monsters has nipped that enthusiasm in the bud. There were some highlights in this zombie movie. But overall, I was plagued by a yawning attack and I was constantly annoyed about certain situations. 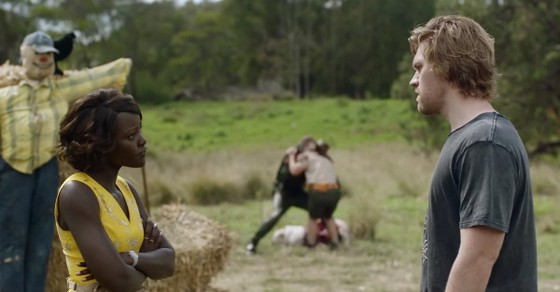 I do understand that all kinds of new perspectives have to be devised nowadays to make the zombie genre even more interesting. In The Dead Don’t Die they largely succeeded in that. But that’s personal taste. Coincidentally this film used the type of humor that I like the most. In Little Monsters the humour was generally absent. The absurdist tone of The Dead Don’t Die was traded for flat and childish humor. Believe me, the amount of irritation exceeded the allowable level several times. After 2 minutes I was already annoyed by the opening scene where Dave (Alexander England) and his girlfriend constantly yelled at each other. Just like their friends, I felt ashamed on their behalf. And that wasn’t the only time while watching this film.

First, let me list the most positive aspects. Without a doubt, there’s first and foremost the presence of Lupita Nyong’o. This Oscar winner moved me in 12 Years a Slave. And played a hair-raising role in the movie Us. In this movie, she’s such a ray of sunlight with that dazzling yellow dress. Probably strategically chosen so it contrasts sharply with the splattered blood. And with her ukulele and catchy version of Taylor Swift’s “Shake it Off”, it seemed like I was looking at a modern Maria from The Sound of Music. Certainly when the entire classroom joins her with the song like a real Von Trapp family. But apart from the fact that she’s very musical and fashion-conscious in this film, you also have to admit that Lupita is simply a beautiful woman. Even if she opens her mouth in a panic and produces an uncontrolled scream with her eyes wide open, she’s still adorable. And she’s actually the funniest one in the film.

To a lesser extent, I also thought Alexander England was pretty good. This irresponsible, sometimes imbecilic klutz, is quite annoying at times. But nonetheless, due to his clumsy attitude and behavior (mainly in terms of social skills), he still manages to arouse some sympathy. I found his encounter with Miss Caroline quite endearing. That suddenly emerging urge to seduce this teacher. But then, in the next scene, you see him giving a demonstration of solo sex on the toilet while drooling over a class photo (with school teacher Carolina in it of course) of his nephew Felix (Diesel La Torraca). Would I be a teenager, I would chuckle about this. Now a raised eyebrow was the only result.

This would-be-creepy zom-com also had its charms. The clumsy way in which Dave tries to impress Miss Caroline is quite funny to see. And of course, eventually, she gives in, even though she hates Dave from the start because of his brutal and stupid remarks. And finally, there are a few very funny moments such as the Darth Vader scene and the horde of singing zombies. I got the most spontaneous smile on my face when I saw a bewildered zombie attempting to clap to the rhythm and he found out that both his arms were missing. And here and there there was a pretty good joke or one-liner.

But still. Unfortunately, the number of irritating things was overwhelming. I was relieved when this zom-com ended. First of all, I thought the zombies were extremely ridiculous. It was like a school project in which the creatures were played by fellow students. A Wednesday afternoon activity that involves a lot of fun. You can’t call it a horror, in my opinion, because of the lack of tension. The most bloody scenes always take place off-screen. This is probably due to the budget. Perhaps the much-used photo with Lupita covered in blood and those anxious-looking children in the background, raised wrong expectations for me. And as I mentioned before, the humor was missing. But mainly I was annoyed by the figure of Teddy McGiggle (Josh Gad). Such an annoying character. If I could, I would have personally fed him to those bloodthirsty undead. I know it’s an Australian indie. But to be honest, it looked really cheap (literally as figuratively). The only question I had was: “What’s a famous, talented Hollywood star like Lupita doing in this movie?”