A little over a year ago, the Victorian government was presented with the idea of building a full-scale working replica of Shakespeare’s theatre, the second Globe, to be filled with a festival of the Bard’s masterworks. The concept from founder and artistic director Dr Miles Gregory and executive director Tobias Grant originated a year before that.

Pop-up Globe opened for the first time in February 2016 in Auckland, where 100,000 people attended. The season was extended twice due to demand. The flame had been well and truly been lit. A team of 80 people have created what is on show in Melbourne, among them actors, artists, craftspeople, builders, directors, costume makers and production specialists. 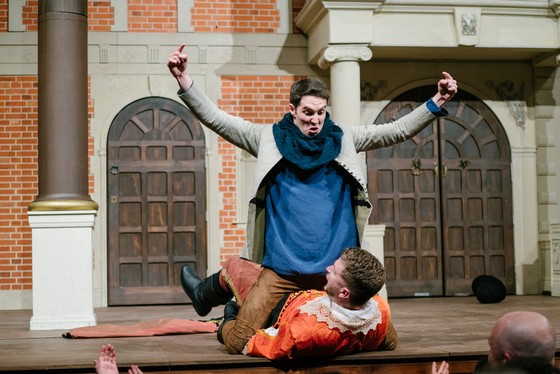 Four plays are involved in the season, including Much Ado About Nothing (1598-99), Othello (1604), Henry V (1599) and As You Like It (1599). I witnessed the latter, the comedy directed by Tom Mallaburn. The production is set just before the English Civil War, in the early 1640s. Duke Frederick has usurped his older brother Duke Senior, forcing him into exile. The Senior’s daughter, Rosalind, stays behind to keep her cousin, Celia, company. Orlando de Boys has been kept in poverty by his brother, Oliver, since their father’s death. He wins Rosalind’s favour after an unexpected victory against Charles the Wrestler at Frederick’s court, but the path to true love is hardly a smooth one. Treachery and hijinks abound.

Now here’s a revelation – you don’t have to be a Shakespeare purist to appreciate what is on offer here. You can follow the gist of the story even if you find the old English baffling. It is simply wonderful entertainment, masterfully conceived and executed. And you are so close to the action throughout – I mean literally every seat in the house. What this company has put on – the way they play with the material – is downright hilarious. Breaking out for contemporary sing-alongs, interacting with, inciting and cajoling the audience just adds to the mirth and merriment. Peels of laughter ring out frequently, a sure sign a grand time is being had by all. 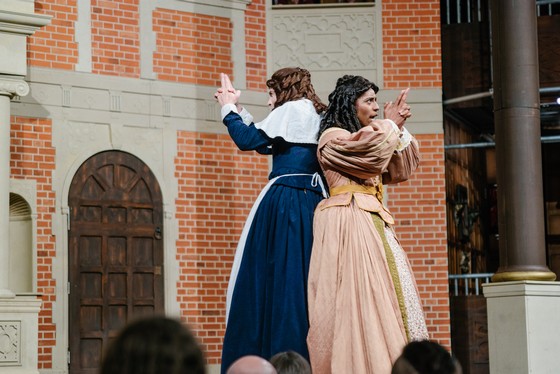 The 15 actors make it a night to remember. Males fill all roles, including those of the women. They ham it up and camp it up to make the most of the situation. I expected it to be good, but what was delivered was so much better than that – saucy, sassy and, on occasions, surprising. To say any more would be to risk giving too much away. Just ensure you buy a ticket to delight in a surfeit of riches.

Pop-up Globe, next to the Sidney Myer Music Bowl, offers four levels of seating in a 16-sided theatre with a 900-seat capacity in a season that continues until 12th November.