In 1986 comedian Rodney Dangerfield went Back to School for one of his better comedies. Thirty years later, comic Melissa McCarthy goes back to school for the flat and largely lifeless Life of the Party . 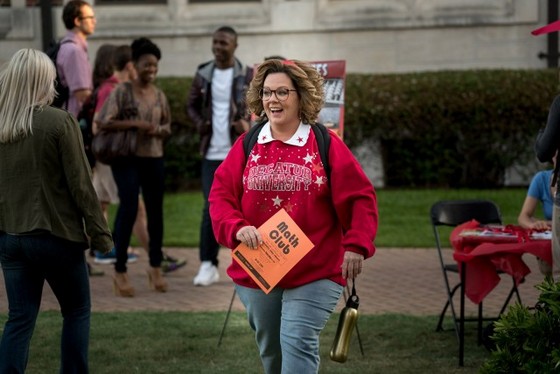 This is the third collaboration between McCarthy and her writer/director husband Ben Falcone. It follows the awful Tammy; and the patchy and indulgent The Boss. McCarthy was so good with her breakout role in Bridesmaids, for which she was Oscar nominated. And while Spy was enjoyable enough, she’s struggled to find a consistently funny crowd-pleasing comedy since then. Although they’re successful at the box office, her recent comedies have been hit-and-miss.

Here McCarthy plays the outgoing but annoying forty-something Deanna. Deanna has just dropped her daughter Maddie (Molly Gordon) off at college when her milquetoast husband (Matt Walsh) announces he wants a divorce. Devastated by the news, Deanna decides to re-enrol in college to finish the archaeology degree she abandoned 20 years ago when she fell pregnant. She shares the same classes and sorority as her daughter; but Maddie isn’t exactly thrilled with the idea.

Cue lots of the typical college comedy clichés – parties, sorority hi-jinks, mean girls, hook-ups – and little in the way of actual study. Along the way Deanna (now known as Dee-Rock) dishes out some maternal advice to her sorority sisters. She partakes in some epic parties and earns a formidable reputation on campus. She even finds romance with the handsome and much younger Jack (Luke Benward). And despite the initial awkwardness of having her mother so close, Maddie slowly begins to bond with her mother. And Deanna enjoys her newfound freedom.

But very little of this is actually laugh-out-loud funny, despite the best efforts of McCarthy and her larger-than-life personality. Her collaborations with Paul Feig have been very funny and used her talents to best effect. Maybe McCarthy and Falcone should stop making films together, or at least bring in another writer or director to bring a critical eye to reshape the material before the cameras roll. At an overly generous 105 minutes, Life of the Party outstays its welcome.

Falcone and McCarthy have assembled a strong ensemble cast by calling in favours from their circle of friends. They include McCarthy’s SNL alumnus Maya Rudolph, Australia’s Jacki Weaver, Stephen Root, Modern Family’s Julie Bowen, Disney princess Debby Ryan (recently seen in Riptide), and even a cameo from Christina Aguilera.