A ninja story with young Lego block heroes, The Lego Ninjago Movie is the third in the franchise of Lego films, which started with The Lego Movie in 2014 and earlier this year offered up The Lego Batman Movie.

Lloyd, the Green Ninja (the voice of Dave Franco), and his friends – Kai, the Fire Ninja (Michael Peña), Cole, the Earth Ninja (Fred Armisen), Jay, the Lightning Ninja (Kumail Nanjiani), Nya, the Water Ninja (Abbi Jacobson), and Zane, the Ice Ninja (Zach Woods) – are all secret warriors. Led by Master Wu (vocalised by Jackie Chan), as wise-cracking as he is wise, they must defeat evil warlord Garmadon (Justin Theroux), The Worst Guy Ever, who also happens to be Lloyd’s dad. This is all about checking egos and pulling together. The yarn calls upon Lloyd and his fellow ninjas to look within, to find their own true strengths and talents, and their inner … peace/piece. 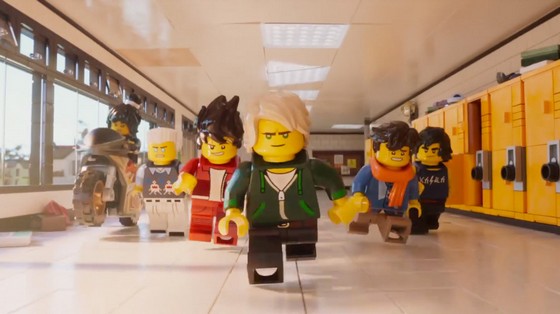 It is a film concerning a boy’s disconnect with his father and a journey of self-discovery. The Lego blocks I played with as a kid were a whole lot more stimulating than this dull, derivative pic, which literally put me to sleep. It is my least favourite Lego movie thus far and to tell you the truth none of them have really rocked my boat that much. I understand that I am not their target audience, but I can appreciate a children’s picture, or a family film for that matter, as much as anyone. Short of stiff Lego movements and an array of colourful new Lego characters, what have you here, other than a boring story in desperate need of twists and a rewrite?

Please, oh please, give me originality, not just a teenager yearning for his father’s support. The intended humour fell flat. I think I got only one very mild chuckle from all that was dished up. The ending was squirm worthy. I had trouble understanding Jackie Chan, who looks mighty good for his age, I might add.

If you are under 10 you might get more out of this than I did, for I felt it was seriously underwhelming … a misstep of grand proportions for the massive amount of work that goes into pushing these kinds of movies out. And guess what? My biggest criticism gets back to the lack of creativity in the script (the screenplay was by Bob Logan, Paul Fischer, William Wheeler, Tom Wheeler, Jared Stern and John Whittington – who knows perhaps too many hands at the wheel?).

With direction from Charlie Bean, Paul Fisher and Bob Logan, The Lego Ninjago Movie, which also features the voice of Olivia Munn as Lloyd’s mother Koko, scores a 3 out of 10.