Froth and bubble, Legally Blonde: The Musical remains a fun-filled romp and genuine crowd pleaser … more than a decade after it opened on Broadway and was nominated for seven Tony Awards. A spirited 20-strong cast and 14 talented musos bring to life the story of a vacuous blonde who comes into her own once she has been wronged.

Sorority head Elle Woods’ (Samm Haggen) biggest concern in life is finding the perfect dress before she goes on a date with her blue blood boyfriend Warner Huntington III (Joshua Firman). So, being dumped because she is not serious enough for him certainly wasn’t on her radar.

But she is not about to take matters lying down. He is going to Harvard Law School, so this fashion plate decides to do likewise and win him back. That’s her sole reason for hitting the books. Once she arrives at the prestigious institution – with a great deal of razzamatazz – she is immediately cast aside as a lightweight.

Her awakening begins when a young man who has done it the hard way – Evan Lever (Emmett Forrest) – manages to get through to her about the consequences of failing esteemed but ruthless professor Callahan’s (Tod Strike) class.

With music and lyrics by Laurence O’Keefe and Nell Benjamin, and book by Heather Hach, Legally Blonde: The Musical made its Broadway debut in April 2007. It was based on a novel by Amanda Brown and the 2001 motion picture of the same name, which starred Reese Witherspoon in the title role. The first Australian production came five years later. Now James Terry Collective has brought it back and its relevance in this #MeToo era certainly isn’t lost on anyone.

Powerful vocals and a commanding stage presence see Samm Haggen give the indomitable Elle Woods the required oomph. Just like Elle upon graduating, Haggen is polished and assured, standing for female empowerment and equality.

There is a sweetness about Evan Lever as her mentor and biggest supporter Emmett Forrest. The contrast couldn’t be more striking to Tod Strike’s aloof and slimy representation of the arrogant Professor Callahan. The other key role in the show is that of hairdresser Paulette and Willow Sizer brings an amusing, exotic quality and flair to that persona. 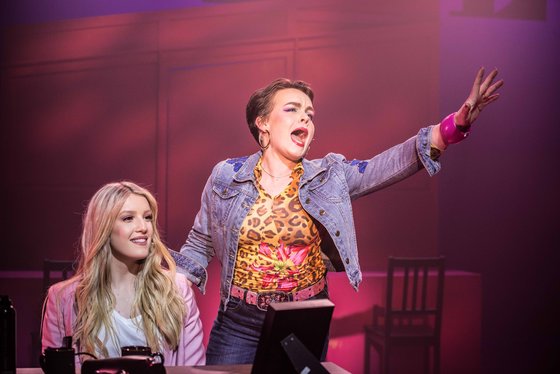 The set – as to be expected – is bright pink (Elle’s favourite colour), with simple props and lighting creating the necessary mood shifts as the story develops. The music is up tempo and vibrant throughout (the musical director is Katie Weston), with the action moving along at pace.

Never mind if you have an intimate knowledge of the narrative arc, Legally Blonde: The Musical is a joyous celebration of triumph against the odds, so is definitely worth seeing again. With direction and choreography from Michael Ralph, it is playing at Chapel off Chapel until 8th December, 2019.