Lean On Pete is a gritty coming-of-age story about a boy and his love for a horse. 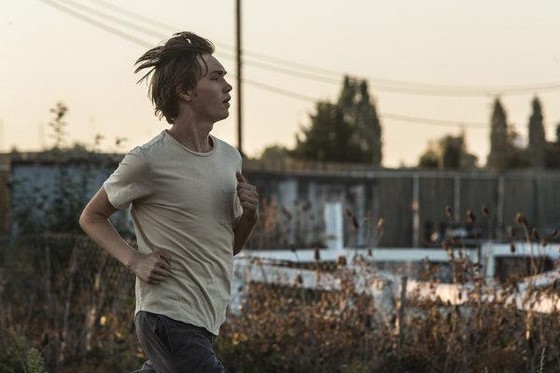 Fifteen-year old Charley Thompson (played by Charlie Plummer, who played Christopher Plummer’s kidnapped grandson in All the Money in the World) is a itinerant teen. He’s travelling around Oregon with his father Ray (Travis Fimmel) who’s looking for work. Charley lands a job working in a stable. He soon forms an attachment with an aging race horse named Lean On Pete, which is trained by Del (Steve Buscemi). When Ray is shot and dies in hospital, Charley’s world begins to crumble. Then he learns the horse is about to be shipped off to Mexico to be slaughtered and he takes matters into his own hands. He makes off with Lean On Pete and embarks on a journey to find his aunt Margy, whom he hasn’t seen in years.

Along the way he has encounters and adventures that lead him into sometimes dangerous territory. He experiences violence and the harsher realities of life.

British director Andrew Haigh (45 Years) adapted Lean On Pete from Willy Vlautin’s 2010 novel. This is the fourth feature for Haigh, who brings an unsympathetic perspective to this view of life in contemporary America. He maintains a low-key approach to the drama. He brings a real sense of intimacy in the relationship that develops between Charley and the horse.

Set in Oregon, the film captures the wide-open landscapes and vistas. They’re beautifully shot by the widescreen lensing of Danish cinematographer Magnus Nordenhof Jonck (A Hijacking).

Plummer, who’s on screen for the whole film, delivers a committed and natural performance. He captures his damaged character’s vulnerability, uncertainty and desperate need to find a connection in this often-cruel world. Buscemi, Steve Zahn and Chloe Sevigny all provide good support.