There was no heavy drama in La Fille mal Gardee; just two hours of fun, gorgeous pastel-shaded 1950s costumes designed by Lexi de Silva, and some really different dance. Add on three separate sets, each a fabulous creation from Richard Roberts and a lively, happy score and you had a ballet that saw the audience leave the theatre smiling happily.

The whole production was a delight and beautifully danced. It is a comic gem and very French. It’s the simple comic tale of two young would be lovers and their battle to be together. 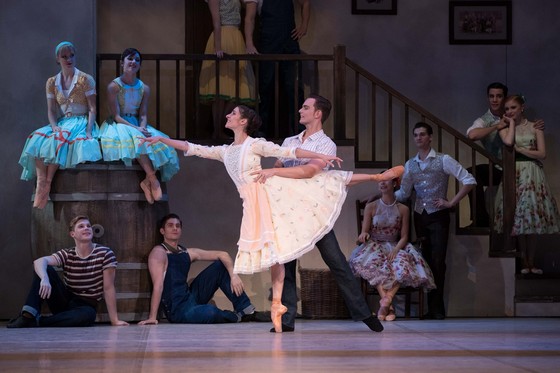 Lise is the only daughter of Widow Simone, who is the owner of a successful agricultural farm. Lise is in love with the young farmer Colas, but her mother has more ambitious plans for her daughter. She has her eyes on a match with Alain, the not-so-bright son of the rich and pompous wine merchant Thomas. And so the hilarious battle of wills commenced.

The fun started then as Lise constantly tried to outsmart her mother and run off to be with Colas. The not so merry widow was riotously danced by Rian Thompson in drag and he created a character that was more like an aged drag queen than pantomime dame, which was highly effective. He obviously has a great feel for comedy. I loved his performance and of course he brought the house down with his miraculous clog dance (inspired originally by a style of folk dance from Lancashire in the UK).

The audience roared its approval as Thompson tapped is way around the stage with great accompaniment from the company dancers. It’s not often you get the chance to laugh out loud during a ballet.

Liam Geck danced the role of Alain. This was also a comedy role, but less slapstick than the widow. I was extremely impressed by the way he created what I saw as the most complex character in the ballet. His dance steps were not the easiest to perform, with some movements that could have directly from John Cleese’s Silly Walks catalogue, but he mastered them all with brilliant comedy timing. He shone every time he was on stage. 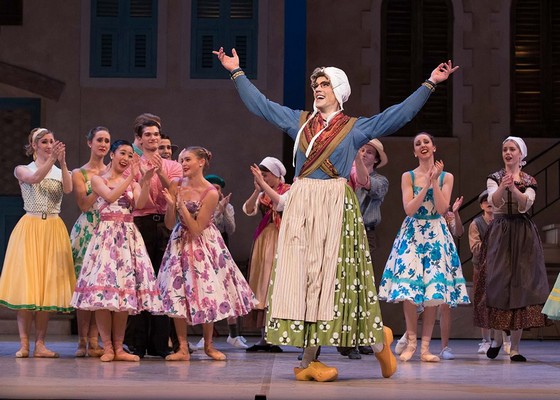 Yanela Piñera was delightful as Lise and once again the acting talent of the dancers shone as she portrayed the many moods of the pretty young daughter. Vito Bernasconi matched up nicely as Colas and they performed several very pretty pas de deux and were every inch the young lovers.

But Mark Ribaud’s choreography really shone with the group dances, with the bouncy friends and the villagers as they joined in the fun and tried to bring the two lovers together and played teenage teasers too. It was good to see Lisa Edwards back on stage and dancing so well as one of the villagers. The evening just flew by and I enjoyed every minute.