The Kransky Sisters rock. They’re an eccentric’s delight and their oddball antics in A Very Kransky Christmas are a delicious treat. I knew nothing about them when I entered Alex Theatre. But I turned into an acolyte long before I exited their hilarious 100-minute pre-Christmas Christmas show. 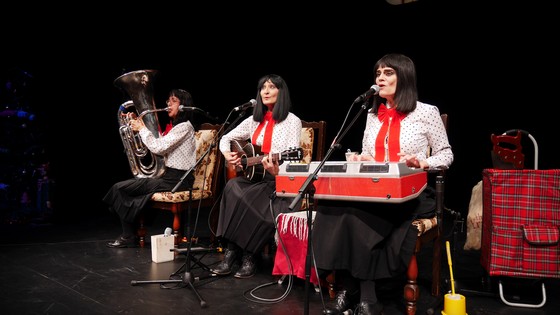 Let’s just say showing emotion isn’t their strong suit (think Austen Tayshus). Of course that is their shtick … and doesn’t it go down a treat. They claim to hail from Esk, a quiet town in Queensland, and spin yarns that play up their bizarre ordinariness. And they sing songs – popular numbers delightfully bastardised, Christmas tunes and mash ups. They accompany these tunes with everything from a musical saw (which gets a good working over) to a toilet brush. There’s also a tuba, guitar, old style keyboard and tambourine.

Before this is over, a couple of hapless audience members are caught in the Addams Family-like vibe. They end up dressed in matching conservative Kransky Sisters garb – long skirts and polka dot tops, complete with ridiculously large red bows and black wigs.

I should also reference the playful bickering between Mourne (Annie Lee) – the eldest, who does most of the talking – and Eve (Christine Johnston). Plus they belittle and sideline their half sister Dawn (Carolyn Johns) – all naturally done in jest. 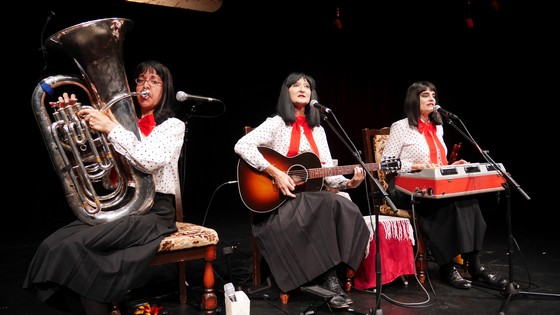 In fact, the whole thing is a hoot. It just gets better and better as their banter and musical accompaniment continues. They even find time for some show and tell. Talk about milking the mundane!

I can’t say I’ve seen anything quite like the Kransky Sisters, spinsters from a bygone era. One thing is certain though: I’m richer for having had the experience. They are performing at Alex Theatre in St Kilda until 26 November 2017. Then their national tour continues until 23 December. Dates and venues can be found at: thekranskysisters.com/touring.