A compelling and dramatic storyline and evocative score are matched by a series of stellar performances in MTC’s musical Kiss of the Spider Woman.

The plot concerns the extraction of information through brutalisation and humiliation of prisoners held in an Argentine jail. More specifically, it involves the relationship between window dresser Molina (Ainsley Melham) and Marxist revolutionary Valentin (Adam-Jon Fiorentino).

Molina is serving the third year of an eight-year sentence for corrupting a minor when he is joined in his cell by Valentin, who is in bad shape after being tortured. At first Valentin is repelled by Molina and his incessant talking. He wants nothing to do with him, going so far as to draw a line on the floor between him and Valentin to stop his cell mate coming near him.

Molina distracts himself by escaping into a fantasy world of movies, where he is enchanted by the glamorous diva Aurora (Caroline O’Connor). He has seen and adores all of her films but one, which involves a spider woman who kills with her kiss. That imagery haunts him. While Molina longs to see his mother again, Valentin pines for his love, Marta (Elandrah Eramiha).

Kiss of the Spider Woman was first performed in the West End in 1992, before moving to Broadway the following year and claiming seven Tony Awards, including Best Musical, Best Book of a Musical and Best Original Score. With a book by Terrence McNally, music by John Kander and lyrics by Fred Ebb, it is based upon the 1976 novel of the same name by Manuel Puig.

Ainsley Melham acts up as storm as the sensitive gay guy, Molina, inhabiting his persona like few could. He breathes life, heart and soul into the words and music. Adam-Jon Fiorentino gives a nuanced performance as his hard-nosed cell mate, Valentin – a dissident who gradually warms to Molina’s charms.

And then there’s the incomparable Caroline O’Connor with a star turn as the femme fatale, the object of Molina’s fantasies and great fear. In the 11-strong cast, I was also taken by the performance of Bert LaBonte as the evil and manipulative warden, who calls the prisoners “animals” and treats them appallingly.

I haven’t yet detailed the diverse elements that come together to take us to where the action is set. That starts with the realisation of the penitentiary where Molina and Valentin are housed (the set and costume designer is Alicia Clements) – a dark and foreboding place of pain and heartache. It is a large two-tier set, incorporating a small portable room for scenes that warrant it. A number of metal beds with dirty mattresses, upon which the prisoners sleep, immediately transport you to the prison environs. 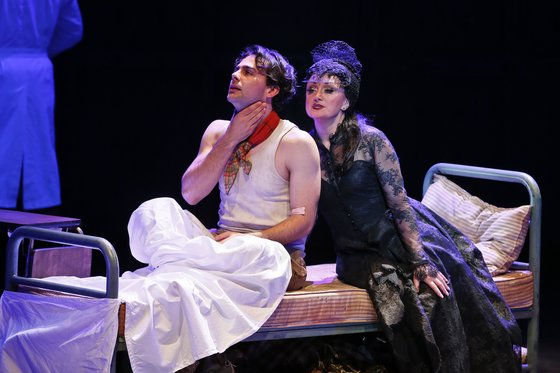 Coloured lighting is used to great effect to create different moods and distinguish day from night. The choreography by Andrew Hallsworth, including some dance numbers, is another distinguishing feature. The costuming is in large part sombre – in keeping with the mood of the piece – apart from the array of vibrant gowns and a short shimmering number with tassels worn by O’Connor. Video is also used to add to the atmospherics (projection design is by Jamie Clennett).

The production is completed with the talents of a five-piece band – at the back of the stage – which is exposed on a few occasions. Kiss of the Spider Woman weaves an intoxicating web in which dark truths are only lightened by the world of make believe. Directed by Dean Bryant, with musical direction and orchestration by Jack Earle, it is playing at Southbank Theatre, The Sumner, until 28th December, 2019.

I saw the first preview performance.