If you haven’t heard of Kill Climate Deniers you probably should have. The hyperbolically titled play’s controversial take on the contentious climate change debate in Australia saw it hit the headlines in 2014 when its playwright David Finnigan received $19 000 from Arts ACT to write a play exploring climate change and Australian politics. The resulting script was nominated for the 2014 Max Afford National Playwrights Award, but its initial staging was postponed due to a backlash by conservative columnists. It’s initial and subsequent drafts compositing the scandal into the work, are discussed amongst the show’s many meta-theatre mentions, mostly by Finig (a pseudonym for playwright David Finnigan), played by Caitlin Hill. 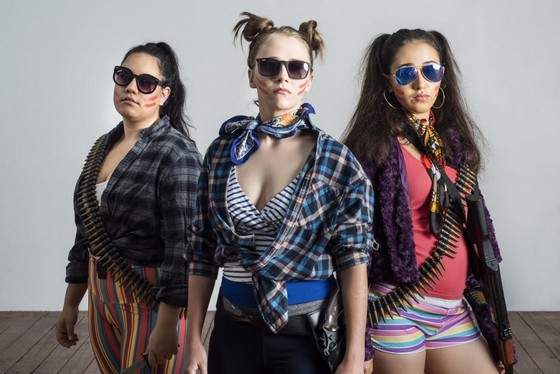 It does not take too long to move into the show’s narrative call to climate arms of sorts; embattled Environment Minister Gwen Malkin (Jessica Veurman) is being interviewed on talkback radio about her intricate $75 billion climate scenario option plan to blot out the sun by using helium balloons that spray light-blocking gasses into the atmosphere. The interviews continue that evening when she arrives at Parliament House with her social-media savvy press advisor Bekken (Charleen Marsters) for a classic rock band’s concert. As everyone settles in for the evening’s entertainment a militant cell of radical eco-activists, led by passionate spokeswoman Catch (Julie Cotterell) takes the audience hostage with demand that Australia immediately cease all carbon emissions and coal exports. Malkin and Bekken, however, have gone to the bathroom so are oblivious to what’s happening… until they start running into terrorists in the halls and the action really begins (Fight Choreographer Jason McKell).

So many aspects combine to ensure the inventive satire’s on-stage success. Its boldness beyond just its political themes is reflected in its perfectly-pitched performances. The duo of Veurman and Marsters as Malkin and Bekken make for a wonderful comic team of the “Absolutely Fabulous” sort. Together, they craft some hilarious scenes. Veurman is captivating in conveyance of her character’s nervous energy, and Marsters injects energetic humour into every movement, gesture and facial expression of hapless personal assistant (more than just press advisor) Bekken. Caitlin Hill is brilliant as the narrator/author Fing, presenting an explanation of the work that paces along despite its scientific dabbles and balances this beautifully with the absurdity of her play of ‘Fleetwood Mac’ if Fleetwood Mac was a character in and of itself. Of particular note, too is Clementine Anderson who presents a perfectly pitched performance in over-the-top media personality caricature.

Kill Climate Deniers is dynamic in both form and execution. Its clever staging sees characters even performing a scene from with the stalls, projected to the alongside audience. Video projections (Projection Designer Justin Harrison) feature throughout as a key component of the show’s vibrant realisation. Words and images are projected on a curved back-of-stage wall, both to progress the narrative and provide additional statistics, quotes and visual jokes, often accompanied by a soundscape of either deliberate doom or satirical merriment (Composer & Sound Designer Wil Hughes). A scene in which an overhead projector is used to illustrate our envisaged personal potential futures 30 years from now, however, represents the show’s only unsatisfying section, when its presenter’s shadow blocks out most of the images, overwhelming its message. Colourful and camp in costuming, staging and music, Kill Climate Deniers is also, surprisingly irreverent, which makes its two-hour experience fly by in what seems like the shortest of time. This is helped too by its fast and furious soundtrack of classic techno dance tunes of the C+C Music Factory and Black Box sort. 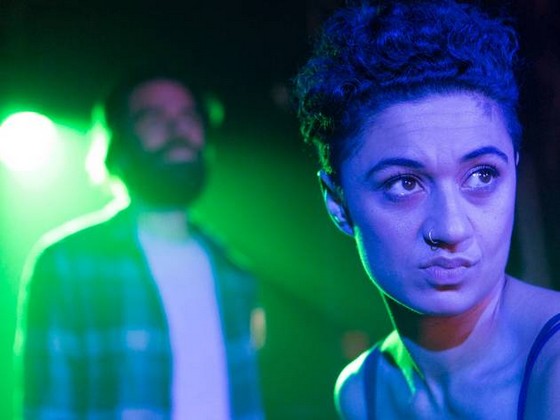 Kill Climate Deniers may not be good politics, as some have claimed of its previous productions, but good art is not necessarily good politics and Kill Climate Deniers is very good art. The complex, multi-layered thought-provoking political comedy showcases clever writing (not clichéd as so easily could have been the case), artfully infused with pop culture call-backs and even a Fleetwood Mac concert segment of sorts.

This is must see theatre, not just because of its Queensland premiere status. Director Timothy Wynn has delivered first-rate, full throttle independent theatre of the sort rarely seen executed to this level of expertise. It is an exhilaratingly playful experience to take from and discuss what you will and it not only represents the best that Ipswich’s That Production Company has offered up thus far, but my most-loved show of the year yet, and favourite even experienced at Metro Arts.

Kill Climate Deniers is playing at the Metro Arts until 25 May 2019.