A cast of non-professional autistic actors does a mighty job breathing life into an unconventional love story in Keep the Change.

We meet wealthy David (Brandon Polansky) on his first day at Connections, a community for adults with autism. The other attendees confirm he doesn’t belong there … at least that’s the way David feels at first. Back at home, he begs his parents to let him leave the program, but this summer course is the result of a legal misdemeanour, so David has no choice but to continue. 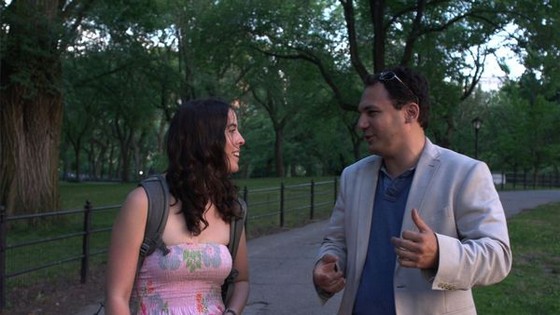 In a classroom exercise, he’s paired with Sarah (Samantha Elisofon); who’s nothing if not persistent. They’re given an exercise to visit the Brooklyn Bridge. Although unexpected from David’s perspective, his initial disdain for Sarah turns into something else entirely. But like all relationships, it’s not all smooth sailing, especially because of David’s disapproving mother, Carrie (Jessica Walter).

Most films begin with a script, but not with Keep the Change. Writer and director Rachel Israel first cast the amateur actors and then crafted the story around them. For four years before filming, she worked with the cast regularly to create fictional versions of who they are, which resulted in the characters we see on screen.

There’s much to enjoy about Keep the Change. Firstly, it’s a delightful story populated by colourful characters. Secondly, the situations these characters get into are believable. As a result, we care about and for the characters, especially the central pair. Their relationship marks a significant transition for both.

As they learn more about each other, we learn more about the quirks in their personas that make them who they are. One is arrogant and self-centred, the other effusive and full of life. She surprises, delights and embarrasses him. He lets down his guard, but doesn’t always say and do the right things. Both grow and learn, but it’s clear each is stronger with the other in their lives. The question is will it be enough?

Polansky and Elisofon do terrific jobs in the lead roles, ably supported by others cast as fellow Connections attendees, each with their own peccadilloes.

Well made, endearing and insightful, Keep the Change‘s message of tolerance, respect and understanding really hits the mark.