Kedi is the Turkish word for cat, and cat lovers everywhere will relish this simple but charming documentary from Turkey about the stray cats that live on the streets of Istanbul. Cats have been a feature of the city for hundreds of years. The adorable feral felines are cared for by the various local people who work in the market, the shops and the harbour, who also feed them. The cats are for the most part independent, but are more than happy to accept food and hugs from the locals. 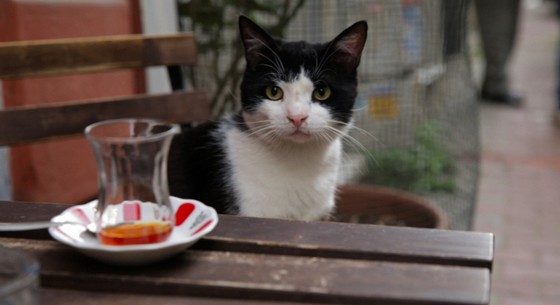 Kedi is the debut feature for Turkish-born filmmaker Ceyda Torun, who was raised in Istanbul but now resides in the US. This is a love letter to both the city and the cats that inhabit the streets. Torun speaks to a number of Istanbul locals, who talk of the symbiotic relationship of their interaction with the cute felines, who wander in and out of their lives. They also talk of the positive and often therapeutic benefits of this interaction. Torun captures this unique bond between animal and human and the often complex dynamic that exists between the two. Torun gives us a bit of a history lesson about Istanbul and its rich culture. She also highlights the impact that the growing redevelopment of the city has on both the cat’s environment and that of the residents.

The film looks fantastic thanks to some inventive cinematography from Alp Korfali and Torun’s husband Charlie Wuppermann, who give us some great aerial shots of the Istanbul streets, which gives the film an ethereal quality, as well as some low-level work from the perspective of a cat as the camera prowls through the markets and streets.

This is a leisurely paced film that runs for just 80 minutes. During the extensive pre-production phase, Torun and her crew found 19 cats that they would focus on. During the post production, they whittled it down to seven cats. Torun and her crew spent eight weeks shooting the film, and the massive amount of footage has been deftly edited and shaped by Mo Stoebe. It nonetheless gives the audience plenty of time to observe the antics of the subjects.

All of the cats have their own distinct personality and are the real stars of this documentary. The cats have all been given names by the people – there is Sari, Gamsiz, Deniz, Aslan Parçasi, Bengü, Psikopat, and Duman. Bengu for example is a mother cat who has her new litter to look after and protect, and she covers several miles of the city every day in search of food. Duran is a fussy eater and hangs around outside a deli for treats. Little Lion kills rats and earns its feed at the local fish market.

There are lots of tracking shots that follow seven cats through their everyday routine, foraging for food, stealing food from the local markets, fighting off rivals, and battling for attention and affection from the humans. There is also a marvellous soundtrack of Turkish music from Kira Fontana that enriches the atmosphere.