The original Jumanji (1995) concerning a board game coming to life, which starred Robin Williams, was a rolled gold winner. The reboot – two years ago – was in my eyes an unmitigated disaster, notwithstanding its box office success. This sequel is slightly better than that, but still basically very, very silly. Give me the original or Indiana Jones, for that matter, any day. 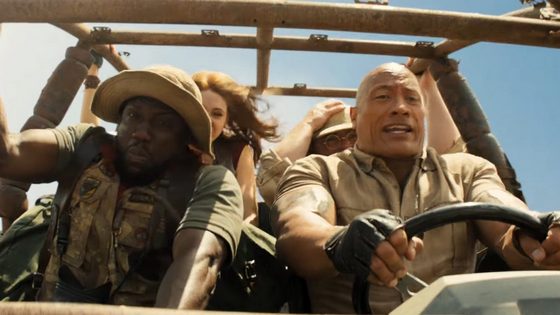 Jumanji: The Next Level reunites the four teenagers who survived the trials of Jumanji: Welcome to the Jungle as they return home to Brantford, New Hampshire for the holiday break. Now college students, they’re trying to navigate the next step in their lives. We soon discover that everyone is dealing with this new phase differently: some are thriving while others are having a tougher time adjusting to life after conquering the game.

After Spencer feels compelled to go back into the game, Martha, Fridge and Bethany team up and re-enter the world of Jumanji in an endeavour to bring Spencer home. This time – as is only to be expected – the jungle is bigger, more dangerous and has more thrilling obstacles to overcome.

Also back in play is the avatar team. That, of course, includes Dwayne Johnson. Now, rather than the intrepid archaeological adventurer and muscle-bound action hero Dr. Smolder Bravestone, he serves as the avatar for Eddie (Danny DeVito), Spencer’s grandfather. In the previous film, he got to play a neurotic teenager and now he is at the opposite end of the spectrum.

Jack Black returns as Dr. Sheldon “Shelly” Oberon, the “curvy genius” whose strengths lay in cartography, archaeology and palaeontology. In the original, he was an avatar for Bethany, but now he is Fridge. Badass bombshell and martial arts master Ruby Roundhouse (Karen Gillan), known as a “killer of men”, is once again Martha’s avatar. Bethany is back in the game too, though in an unlikely way … as a majestic black stallion. Diminutive zoologist and weapons valet, Mouse Finbar (Kevin Hart) is there too, sporting his trademark red bandana and huge backpack of weapons. This time, he becomes an avatar for Eddie’s estranged friend and former business partner, Milo (Danny Glover).

The newest avatar is the mysterious Ming, played by Awkwafina. Her strengths include cat burglary, pick-pocketing and safe cracking.

Two of the four writers from a couple of years ago are back, along with the same director, Jake Kasdan, who this time also has a hand in the screenplay. First up, I have to say it is, at times, downright confusing just who is who … which avatar is which character … and then of course some switch and switch back – of course they do.

Some performances are better than others. Two stood out for me. Kevin Hart was surprisingly good and somewhat less manic than usual as Mouse Finbar, while Danny De Vito has a fine time of it as grandpa.

I actually thought the set-up … the contention was okay, but things began to fall apart once they were magically transported to the world of make believe. The expression stupid is what stupid does immediately comes to mind. The plot line joining present and fantasy is about as transparent as you can get.

And, of course, when the combatants have three lives, they each have to get down to one before we have resolution.  Also, the film is more violent than I believe a family picture should be.

There is no doubt there is a market for this kind of nonsense, otherwise studios wouldn’t waste their time and spend their money on attracting big names and lavish special effects.  Still, for mine Jumanji: The Next Level is lowest common denominator fare. Rated PG.