This low budget drama is the sophomore feature film from Australian writer/director Benjamin Gilmour, and follows his 2007 drama Son of a Lion, set in post 9/11 Pakistan. Gilmour is familiar with the region and has chosen to set his new film in Afghanistan. Jirga deals with an Australian soldier who returns to the region several years later on a personal mission of redemption. 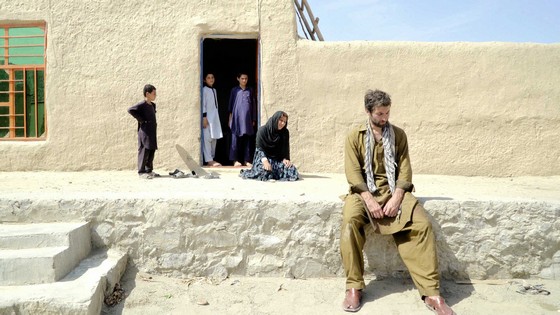 Years earlier during a raid on a village, Mike Wheeler (played by Sam Smith in his feature film debut) shot and killed a villager. Consumed by guilt over the act he has come back to track down the family of the man he killed and ask for their forgiveness. He carries with a large amount of money. Wheeler is an outsider in this land and is still viewed with suspicion by many of the locals.

His journey takes him to the heart of this desolate, harsh sparsely populated region. He meets a number of people along the way who help him on his mission, including an amiable and garrulous taxi driver (Sher Alam Miskeen Ustad, who also appeared in Gilmour’s Son of a Lion), who drives him across this war-torn landscape and takes him some of the way to Kandahar. Wheeler is also caught by a band of Taliban soldiers who beat him, but, intrigued by his mission, eventually escort him to the outskirts of the village. Wheeler then throws himself upon the mercy of the jirga, the council of elders, who will decide his fate.

Jirga is another film that deals with the war in Afghanistan and its aftermath. The film resonates strongly with its humane themes of compassion, forgiveness, justice, and it also delivers a strong message about the impact that war has on both the civilians and the soldiers. Gilmour has cast the film with non-professionals drawn from the area, which further adds to its authenticity. The opening scene depicting the nighttime raid on the village has been effectively shot using a mix of stock footage and night vision, and is reminiscent of Zero Dark Thirty.

The film was initially supposed to be shot in Pakistan, but due to death threats and the withdrawal of initial funding from Pakistani backers, Gilmour decided to actually film in Afghanistan. Gilmour has also shot the film himself guerrilla-style using a hand-held camera that was purchased in a Pakistani store, and he gives the material an almost documentary-like sense of realism. The muted colour palette matches the sombre tone of the material perfectly. He captures the bustling quality of the local markets and also gives us great vistas of the immense and exotic landscape. However, the film itself is a little unevenly paced and there are some moments here that don’t quite work.

Smith, who has worked in television for the past decade on shows like Home and Away, brings a suitably stoic quality and sense of guilt to his solid and largely silent performance as Wheeler, an outsider in a strange land. We see events mainly from his perspective, which adds to our understanding of the strange rituals and cultures he experiences on his journey.

Gilmour knows the region well, and obviously has a deep respect for the people and their culture and traditions. We become slowly absorbed in Afghanistan’s rich culture, history, music. The lyrical music score from A J True draws heavily on local musical influences to add to the rich atmosphere. And the distant sounds of gunfire and helicopters flying overhead only serve to remind us of the troubles that still plague the region.