First, a confession. I don’t believe I’ve seen any of the films in the Saw franchise before Jigsaw, the eighth in the series. The seventh, Saw 3D, came out in 2010. To date, the Saw films have grossed $874 million worldwide. And they’ve created one of the most influential horror villains of all time. 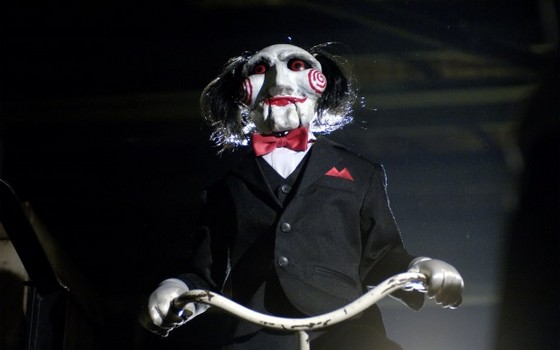 The films follow the machinations of Jigsaw, a terminally-ill cancer patient whose rigorous views on sin and redemption inspired him to create grim survival scenarios for lives he feels were unexamined. Jigsaw ups the stakes with a new puzzle built around a terrifying question: who’s behind a string of new Jigsaw-like killings if John Kramer (Jigsaw’s real name) has been dead for over a decade?

Matt Passmore is cast as medical examiner Logan. He’s a former POW dealing with an unusual new killing spree. The police investigation is being conducted by Detective Halloran (Callum Keith Rennie). Logan has an assistant, Eleanor (Hannah Emily Anderson), who is obsessed with Jigsaw’s instruments of torture.

It wouldn’t be a Saw movie without sets that convey inexplicable confinement and unknowable terror. And traps, plenty of traps. What’s most interesting about this film is that it is both a prequel and a sequel. Impossible, you say. Not really, when you learn that the story both traces what happened a decade earlier and then moves forward to the present day.

I liked what I saw. This isn’t a horror movie that’s merely suggestive. It’s gruesome and blood – a significant amount of it – is spilt as the body count mounts up. The action moves ahead at pace. Dare I say, the torture scenes and devices used to exact punishment are quite sophisticated and impressive.

No doubt it would help to understand the history of the franchise before seeing Jigsaw. But there’s plenty to piece together even without that background.

The Spierig Brothers (Daybreakers) are brought in as directors. They certainly understand the requirements of the genre. Especially early on, I thought some of the histrionics – notwithstanding the circumstances – led to elements of overacting. But overall, Jigsaw achieves what it sets out to do – namely provide thrills and chills. Rated MA, it scores a 7 out of 10.