There is a chill in the air of the Cremorne Theatre as Jane Eyre begins. It’s an affair that befits the terror of Charlotte Bronte’s sophisticated 1847 novel (originally published under the male pseudonym Currer Bell), represented in the stage’s steely blue aesthetic. Not only does it capture the miserable dampness of the northern English landscape of its setting, but its shadows allow for unobtrusive execution of many of its cast’s multiple roles. Jason Glenwright’s lighting design is also used to great effect to evoke the flickering of fire and the shadowy secrets of Thornfield Hall in this hybrid story of gothic romance. 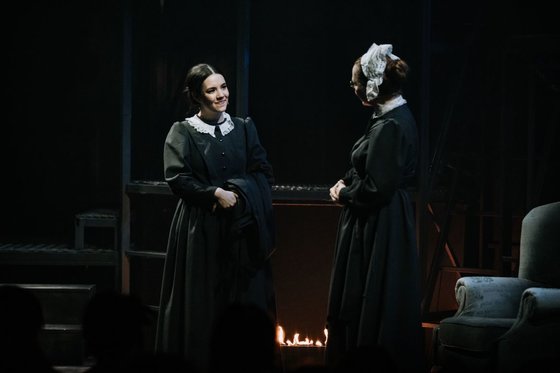 The mistreatment of spirited orphan plain Jane Eyre (Nelle Lee) starts in earnest when, as a 10-year-old, she is cruelly confined to the notorious red room by her venomous aunt. She is soon shipped off to Lowood Institute, a religious boarding school for orphans, where she discovers Victorian class and gender hierarchies through the abuses of the headmaster. She evolves into an educated young lady of conviction. This is just the start of what is an epic story and so a long show.

At times during Act One it feels that way, despite the considerable cut-down of the Lowood sections of the novel. However, the story’s early scenes are important to help the audience get to know Jane better. They also help to understand her plain-speaking pragmatism and righteous determination despite it being 1800’s England. It is therefore a time of strict and rigid societal structure.

After leaving Lowood, Jane assumes employment at Thornfield Hall, the impressive yet mysterious home of Edward Rochester (Anthony Standish). As governess to young Adele (Sarah McLeod), the French daughter of Rochester’s opera dance mistress, she is given opportunity to show her compassion. Soon Jane and Rochester become inexplicably drawn to each other as the dark secrets locked within Thornfield’s walls begin to unravel, forcing Jane on a journey towards assuming control over her own life. It is in Act Two that the production is heightened by its original music, written and performed live on stage by multi ARIA Award-winner and front woman of The Superjesus, Sarah McLeod.

The most astonishing thing about this version of Jane Eyre is that the cast contains of only four members. They – especially the supremely talented Helen Howard – bring great detail to the array of characters they portray. The staging is deceptively complex. It looks minimal – a structure of ladders and platforms – however it gives the actors a dynamic space in which to showcase their craft and they utilise every nook and cranny of it.

As Jane, Nelle Lee is the only actor to play just one character, although she still needs to embody both the unruly child of Act One and the later mature governess, which she does well. Her Jane is an isolated but bold and brave heroine. Care is at the core of her being, seen in her consideration of Adele’s circumstances as being no fault of her own. As the mostly-silent Adele, McLeod is appropriately animated in doll-like demeanour, which adds some light-hearted relief to a show heavily weighted in expectations as much as subject matter. And while not understated, her take on the madwoman in the attic is wildly dark and terrifying, her head and face covered by her untidy hair. 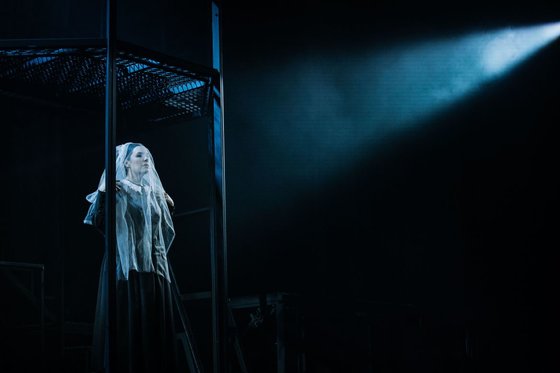 The production maintains the integrity of the classic novel while emphasising its feminist themes. This is a fiery Jane and a fiery story. Standish’s Rochester may be a little less commanding, but still as impatient as his novel self. However, he is humanised so as to make the audience eager for his and Jane’s romantic relationship to succeed despite its obstacles. Authentic language and conversation between the two evokes the emotive tone and stylistic devices of the book’s connotative language and conveys a genuine connection. As always with the company’s page-to-stage adaptations, this Jane Eyre not only caters for fans of the fiction, but makes the story accessible to those new to the work.

There is much to celebrate in this adaption by shake & stir co-Artistic Directors Nelle Lee and Nick Skubij. The stagecraft is intelligently considered, with, for example, stylised movement between characters who never really connect, adding new interest to one of the most iconic pieces of English literature. Indeed, this is a powerful original adaptation, characterised by integrity and intelligence. Jane Eyre is showing at QPAC until November 9th.