What a clever idea. Take a huge musical figure and add an element of intrigue to captivate an audience in a period thriller. In writer-director John Stephenson’s Interlude in Prague, that figure is Wolfgang Amadeus Mozart (Aneurin Barnard). 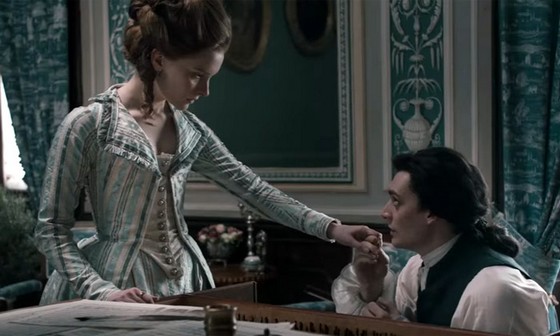 The year is 1787. Mozart – usually based in Vienna – is still recovering from the death of his newborn child. His wife is seeking comfort at a spa. He is already a huge force in the music world and nowhere more so than in Prague, where the citizens love his work. In Prague, the biggest patron of the arts is the slimy Baron Saloka (James Purefoy). He rules over the opera house with reckless abandon and treats all with disdain. At a dinner party Saloka’s guests decide that Mozart should be invited to Prague to perform. Saloka reluctantly agrees.

The Baron is used to taking what he wants and regularly tries to have his way with leading ladies of the stage, as well as staff of his choosing. Now Saloka sets his eyes on a pretty young soprano, Zuzanna Lubtak (Morfydd Clark). But Mozart takes a shine to her too. A jealous Saloka hatches a plan to beat the composer. All the while, Mozart is creating the work that went on to become one of his most celebrated, Don Giovanni.

Interlude in Prague captures the splendour of 18th-century Baroque theatre. The passionate love story is filled with heartache. The narrative, although perhaps lacking subtlety, is well drawn, the characters distinct and readily relatable. The architecture and period detail are stunning.

The music is … well, grand. How could Mozart be anything but?

All the ingredients are there, and by and large Stephenson has done a fine job packaging them.