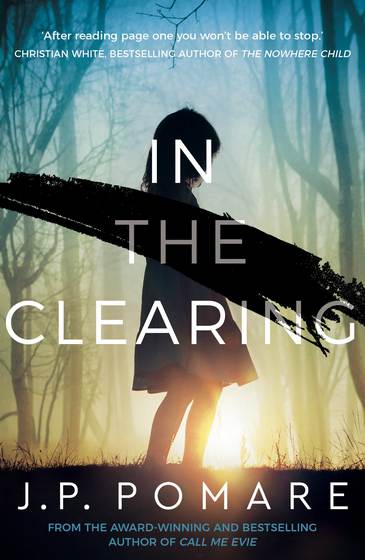 What is always surprising about cults is that they consistently manage to attract seemingly intelligent people who leave their ordered lives to join bizarre communities run by petty tyrants with delusions of grandeur.  What is sadly not surprising is that at the centre of cults there are often innocents, the children.

There’s a few plot devices or themes that can pop up in crime fiction which are not for everyone.  Cults might be one of those for you, as they usually are for me.  In the Clearing is based on a real-life cult, an Australian new age group known as ‘The Family’. I knew very little going into this read about the group, other than that the kids of The Family all had bleached blonde hair ala village-of-the-damned, and that it all began somewhere in the late 1960’s. It’s suggested that you conduct your Wiki diving perhaps after reading Pomare’s book, as too much prior knowledge going in could detract from your enjoyment of this read.

In the Clearing features two first person narratives.  Amy is a teenage member of a reclusive community led by Adrienne, a commanding and charismatic figure referred to as ‘the Queen’ and considered by her devoted followers to be the living reincarnation of Jesus Christ. Amy has taken on the group’s mistrust of all those who live outside of the clearing and that vigilance must always be upheld. Brutal punishments are doled out to any member who breaks their rules, and those rules are in place to keep their ways hidden from those who might seek to tear it all down.

Freya lives with her young son by the river, working as a yoga teacher and managing her property in the heat of summer.  Some in the town know that Freya has two sons, and that Freya hasn’t seen her eldest in many years.  When a young local girl goes missing, Freya’s suspicions are sent into overdrive.  Freya is quite certain that an old ghost from her past has come to visit.

The misdirections employed In the Clearing are subtly delivered and it is upon reflection that you will realize how clever they were.  Freya’s chapters features a countdown to some cataclysmic event, and it is evident that Amy is heading for the point of no return, illustrated via the inclusion of excerpts from her journal. We hold fear for both of them.

Pomare has written a powerful and accomplished second novel that takes a firm hold of your attention from the first chapter. In the Clearing masterfully cleaves a path to the truth with the linkage between the book’s two narrators shocking to realize when it all becomes clear.  The pace of the novel is purposeful and deliberate, information slowly eked out to the reader who becomes increasingly invested in the two who seem utterly alone whilst under serious threat.

If you’re read the work of Inga Simpson before, you may find this book reminds you of her 2015 book, Nest.

New Zealand born author J.P. Pomare, now living in Melbourne, has hosted a writing podcast since 2015 and has been published in various literary journals.  Call Me Evie, Pomare’s best selling crime novel debut, was the winner of the 2019 Ngaio Marsh Award (NZ) for Best First Novel.

In the Clearing was published in December 2019 by Hachette Australia.