A psychoanalyst crosses the line and has to find a way out in Saltpillar Theatre’s In Bed with the Bishops. This new world premiere work was written especially for Saltpillar by Melbourne psychiatrist-turned-author and playwright Rob Selzer. The play, filled with sharp one liners, moves along at pace.

It’s far from a straightforward journey for Dr Jack Glass (Joseph Sherman) or his charges. The doc is a gay man, but was formerly married with children. Now in debt, he’s about to release a book titled “11 Steps to an Authentic Relationship”. With the blowtorch applied to him in his $275 a visit practice by an exacting pair of patients, Dr Glass becomes a mental and physical wreck. 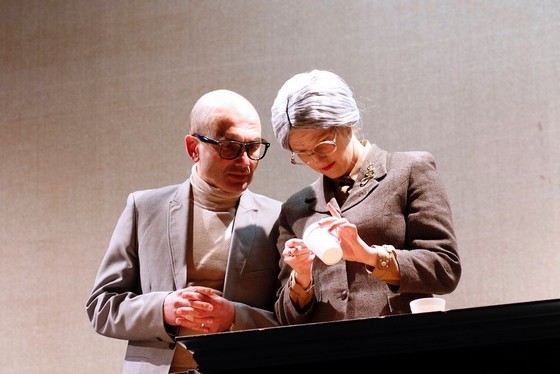 He seeks counsel from his long-standing supervisor, a no-nonsense Jewish woman called Zelda (Tali Brash). She listens to him in between sessions with married Catholic couple Barry and Betty Bishop (Adi Snir and Tiffany Davis), who are desperate to conceive, but can’t. A successful television host, Betty is a non-drinking, high maintenance control freak. Barry’s a mega-rich stock broker who chanced upon his ability to make big money and is afraid he will be exposed as a fraud. Many questions remain to be answered: including whether Barry is in the closet, and why Dr Jack is prolonging this couple’s treatment.

Mayhem and hijinks abound for this two-hour walk on the wilder side. The play is all the better because of the distinct personalities afforded to the four characters, each with their own peccadilloes.

All four actors appear to have fun with their larger-than-life roles. The lion’s share of the verbiage is with Sherman, who also does much of the heavy lifting; since he’s in every scene. His delivery and the production as a whole – which is well conceived – would benefit if Sherman slowed down parts of his delivery. The result is that occasionally words are “swallowed” and the audience misses the impact of some of the jokes. The others – Snir, Davis and Brash – are solid and consistent performers. 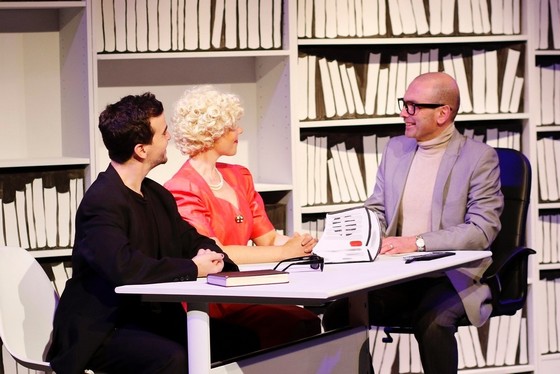 With a clever and appropriate title, In Bed with the Bishops, directed by Greg Ulfan, is a laugh-inducing comedy that features creative cartoon-like staging (the set design is by Lara Week). An excellent full-colour program is also available for the cost of a gold coin donation. Saltpillar Theatre’s In Bed with the Bishops is playing at the Phoenix Theatre in Elwood until 26 August 2018.