Director Barry Jenkins proves Moonlight was no fluke with another outstanding piece of filmmaking in If Beale Street Could Talk. This gorgeous, multi-facted film takes a seemingly simple story and builds it into something much more.

Jenkins fits together basically three aspects of the black experience in America. First he examines the importance of family. Then he delves into how racism affects the lives of young black men. And finally he looks at the experience of those same young men in the criminal justice system. But the film feels like a cohesive whole, despite its disparate elements. Of course, it helps that Jenkins is working from outstanding source material in James Baldwin’s 1974 novel of the same name. Jenkins himself wrote the adapted screenplay. 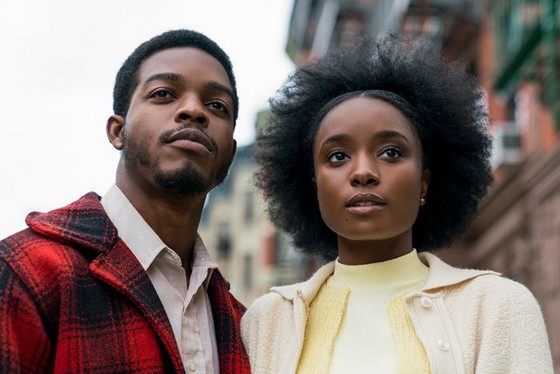 Like the novel, the film is set in New York in the early 1970s. Tish Rivers (KiKi Layne) is 19 years old and in love with Fonny Hunt (Stephan James). When Tish falls pregnant, she worries what her parents Joseph (Colman Domingo) and Sharon (Regina King) will think. To her surprise, they’re pretty cool with it. But it’s a different story with Fonny’s family, particularly his religious mother (Aunjanue Ellis). But far worse than familial disapproval is on the horizon.

Soon after Tish finds out she’s pregnant, Fonny is arrested on rape charges. Tish knows Fonny couldn’t have committed the crime because he was with her across town when it occurred. The only witnesses are the victim, Victoria Rogers (Emily Rios), who has disappeared; and a policeman, Officer Bell (Ed Skrein). Tish seeks out a novice lawyer named Hayward (Finn Wittrock) but with the bills mounting and a baby on the way, Tish struggles to continue the battle for Fonny’s freedom.

Employing some techniques from Moonlight, Jenkins has crafted an absorbing drama. His exploration of the issues is measured, almost calm. Yet they provoke an intense emotional reaction. His approach to the material rests heavily with cinematographer James Laxton. Laxton creates a lyrical rhythm with a highly unusual mix of lush colours and slow camera movement. In one scene, for example, Fonny talks to an old friend (played by Tyree Brian Henry). Laxton’s camera swings languidly between them in a (seemingly) unbroken take. No jump cuts here. It’s all underpinned by a soundtrack featuring Nicholas Britell’s (Vice) swelling score and several jazz cuts. Certainly, if you like action movies, you’ll probably find all this distancing. But Jenkins is asking you to commit. He wants you to dive in, even if it might be uncomfortable at first.

The love story between Fonny and Tish is the centrepiece of the movie, and it works brilliantly. These aren’t star-crossed lovers so much as two people reaching for the stars, even if the world is against them. The racism depicted in the film is also neatly handled. The legal drama however falls a little flat. This isn’t a courtroom drama by any means; but the legal system is integral to Fonny’s (and thus, Tish’s) problems. However the way it unfolds is fairly perfunctory.

KiKi Layne shines as Tish. This is big break for the rising star and she grabs it with both hands. Stephan James (Selma) is similarly great as Fonny, although his role is somewhat smaller. The smaller roles however provide a showcase for some excellent acting. Colman Domingo (Lincoln) is outstanding as Tish’s father, while Regina King deserves the accolades she’s receiving for her role as her mother.

The film finishes on an optimistic note, but it goes to some dark places before getting there. This is complex, intelligent filmmaking. As noted, it asks you to commit. Jenkins isn’t going to spoon-feed you. If that’s a commitment you can make, then I highly recommend If Beale Street Could Talk.