This movie may have passed you by the first time as a sleeper and if so, now is the perfect time to bring it forward in your Netflix queue.  A glorious revenge splatterfest set in an impoverished American suburb, I Don’t Feel at Home in this World Anymore is movie gold. 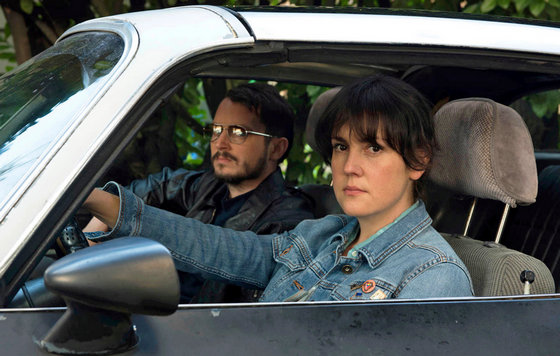 Movies don’t always have to feature beautiful people who have had bad things happen to them unexpectedly.  They can also depict ordinary folk, getting by the best they can until it is no longer tenable to accept the unfairness of it all. The need to fight back or lose completely whatever tattered shreds of dignity that stubbornly remain becomes all important.

Ruth Kimke (Melanie Lynskey) is a hospice worker who despairs at the behaviour of others, living alone in a crummy house in an even crummier street.  When Ruth’s home is broken into, the outrage at how poorly the universe is treating someone who treads so lightly in the world, never causing any offense to anyone else, finally becomes too much for thirtysomething Ruth.  Brushed off by the local police who appear to have more important things to attend to, Ruth comes to the conclusion that she must perform her own investigations and begins to doorknock upon her equally down at heel neighbours.  The metal loving neighbour who constantly lets his dog crap on her lawn turns out to be an unexpected ally to Ruth’s cause and the two pair up.

Tony (Elijah Wood) and Ruth head out to recover Ruth’s laptop after she manages to locate it using a device location app on her phone.  This first success of retrieving her laptop goes better than expected and galvanizes Ruth into next trying to retrieve her grandmother’s stolen china from a local thrift yard.  As Ruth’s campaign for justice escalates rapidly into violent acts, the theft of a lawn tiger (you had to be there) and the impersonation of police officer, the local maniacal thug who originally broke into Ruth’s house locks onto the pair, not happy that they are encroaching into his activities.

Do your googling on New Zealand actor Melanie Lynskey and you might be surprised in which movies you have previously come across her in.  It is probably a given that you enjoyed her ‘just this side of crazy’ performance in TV’s Three and a Half Men, where she played the spurned ex of Charlie Sheen’s character.  Or perhaps you are now watching her in Mrs America. But do you remember the deliciously creepy 1994 film Heavenly Creatures, directed by Peter Jackson?  Yes, you will, so let me gleefully remind or inform you that Lynskey was the ‘other’ girl playing alongside Kate Winslet. Just sixteen years old in her debut film. Lynsey even then dominated every scene she was in.

If you like to grade your thrillers by tallying up your own surprised shrieks, this film will satisfy.  I Don’t Feel at Home in this World Anymore delivers so many unexpected moments of absolute terror and on the flip, bucketing in some of the blackest of black humour, that your reactions will be all over the place.  On a small set with a small cast that commits to playing characters all operating on the knife’s edge of sanity and bitter resentment, this film elevates the plight of the oppressed to something glorious and noble.  Ruth is all of us.

I Don’t Feel at Home in this World Anymore was a Netflix original film and a directorial debut for film maker Macon Blair.  The film also won the Grand Jury Prize at the Sundance Film Festival in 2017.

I Don’t Feel at Home in this World Anymore is streaming now on Netflix.