Rah-rah! American heroes save the world from destruction in Hunter Killer. A hunter-killer is a vessel, especially a submarine, equipped to locate and destroy enemy vessels, including other submarines.

Deep beneath the icy surface of the Arctic Circle, the Cold War never really ended. Here, at extreme depths invisible to the rest of the world, U.S. and Russian submarines continue to play ultra-high-stakes rounds of hide-and-seek. It all begins as a Russian sub sinks in the Arctic Ocean. Soon after, the U.S. sub ghosting it also mysteriously vanishes. 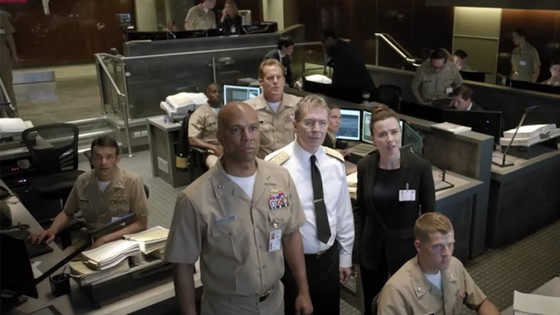 While investigating these unsettling events, military brass in Washington D.C. are sent scrambling when they discover a rogue Russian admiral is attempting to carry out a coup at a naval base in Russia. The only hope to halt a war between the superpowers lies in the efforts of two secret crews.

The first is a clandestine Black Ops team of ex-SEALs who must try to sneak into Russian territory to intercept the kidnapping of the Russian President. Simultaneously, in the sea, Captain Joe Glass (Gerard Butler) and the young crew of the USS Arkansas are under orders to head towards the enemy. As a hunter-killer captain, Glass has mastered the rules of the cat-and-mouse game but will now have to break them as he comes to realise that this time the cat and the mouse may have to join forces.

The script by Arne Schmidt (Chain Reaction) and Jamie Moss (Ghost in the Shell) is based on the novel Firing Point by George Wallace and Don Keith. Donovan Marsh (iNumber Number) directs.

How many times have we seen it before – big budgets, explosions, political tensions ramped up to breaking point? At least this time we have something a little different in the form of cooperation behind the scenes between the Yanks and the Ruskies. Neither side wants to see a madman – in this case the coup leader – assume control.

The whole thing is heavily manipulated to ensure everything fits neatly together. And yet there are several sequences where the tension is palpable. That is commendable. Mind you, all the characters are single dimensional. They serve a purpose and don’t deviate from it. No subtlety. No nuance.

Gerard Butler is the live by the bootstraps commander, Common is the stoic war hero, now rear admiral, while Linda Cardellini is the National Security Agency senior analyst who forms a bond with the rear admiral. That is not to overlook Gary Oldman, whose talents are hardly used to great effect as the admiral feeling the heat.The cinematography underwater and inside the submarines is crystal clear, as if it was shot in a bathtub. The cinematographer is Tom Marais. I mention that because so often with submarine films you can barely make out what’s happening.

So if (American) patriotism and big-budget movies are your thing, go for it.