Given the way they’re heralded around the world as an exciting and innovative physical theatre company, Circa is surely one of Queensland’s great cultural exports. And it’s always wonderful to have them perform to a home-town crowd. They will now be part of a multi-year partnership with QPAC, which begins with their show Humans, an ensemble journey of celebration of what it means to be human. 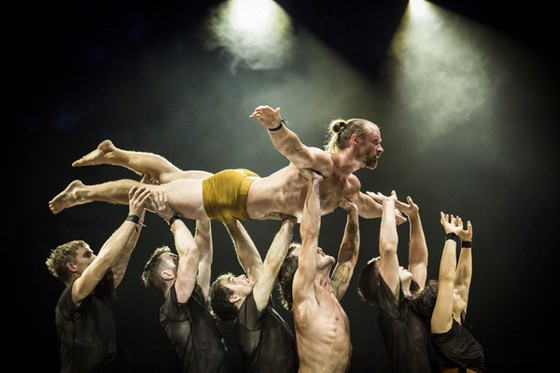 The work sees 10 acrobats exploring the human form in expression of the essence of the human body’s extraordinary possibilities. As such, it is one of the company’s stripped-back and more organic pieces, which even in the Playhouse Theatre still feels like a more intimate experience than some of the company’s previous works. Mostly the show is floor work but there are still some beautiful aerial displays of trapeze, rope routines and straps segments. This is a wise decision as the limited use of apparatus allows concentration on the performers and the amazing things they can do with their bodies.

It begins with a woman twisting out of her clothes, before the entire ensemble join her, spread out around the stage, each in their own space. It’s an engaging introduction that has audience members spoiled for choice in where to look as performers transition from individual movements to working collaboratively in tumble atop and under each other, layering the scene with highly-skilled gymnastic movements. Clearly, this is a work of substance more than showmanship and it is all the better because of it. Even the muted costume tones contribute, adding to the aesthetic without detracting from appreciation of the skills on show. And as its soundtrack transitions from evocative violin to feisty fiddle numbers, this only escalates as bodies are thrown around in tumble, twirl, slide and smash into the floor, in an energetic display to contrast the blank performer faces.

The high energy scenes are dynamic, but there is vulnerability too and many instances where gasps and applause are equally audible from the audience, in response to the innovative choreography as much as the feats of balance and strength themselves. We see a human jump rope, a performer walking and then rolling across a row of the others’ heads and a three-performer-high human pyramid on which a woman balances one-handed. And when the pyramid is inverted, it sees one man, supporting the weight of five people…. astounding stuff. There is laid-bare and beautifully poetic vulnerability too when a man moves around a female performer as if she’s a limp doll needing to be bent into position.

The inventiveness extends also to the soundtrack, which features an eclectic mix of world sounds such as jaunty gypsy stylings, upbeat electronica, sultry jazz and a folksy Joanna Newsom’s “Does Not Suffice” to finish things off. And “The Impossible Dream (The Quest)” is the perfect accompaniment for a revelry routine in which performers all try, through different contortionism, to lick their elbows. Not only are moves cued to music but the use of tempo works well to draw focus. And so, when speech is used, just once, it seems holistically out of place. What matters here is just the human body on display and it is a spectacle easily appreciated, particularly as performers freeze in place in the show’s later moments. There are no characters or discernible narrative here, which makes it easy to become lost in the experience of each routine. The show runs for only 70 minutes but it sometimes feels much longer (#inagoodway), given how much is packed into its experience. 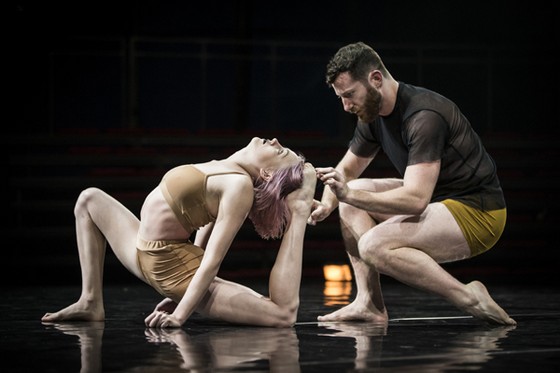 Humans is an astonishing show that reconfirms Circa’s acclamation as one of the world’s top contemporary circus troupes. Indeed, its experience will have you at once amazed and honoured in acknowledgement of its home-grown success. The playful and powerful physical strength, grace and flexibility of its top-of-their-game performers is as mesmeric as it is breathtaking. In Circa’s hands we can truly see the incredible physical feats of which humans are courageously capable.