After the success of Hotel Transylvania (2012) and its sequel Hotel Transylvania 2 (2015), now we have Hotel Transylvania 3: A Monster Vacation. It’s not surprising the studio keeps churning out these Dracula animations. Why wouldn’t they? Especially because, despite his blood sucking reputation, Drac (voiced by Adam Sandler) is one of the good guys in this particular franchise. 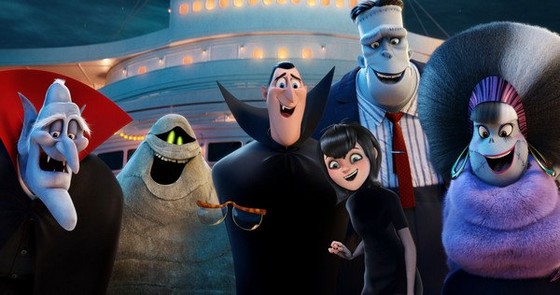 For the uninitiated, Drac is a widower and doting father who runs the titular hotel, which welcomes humans as well as monsters. He has a loyal group of friends and hangers-on, of all shapes, sizes and types. But still, Drac is lonely and secretly looking for love a second time around. Only he’s drawing blanks, and becoming resigned to the prospect that history won’t repeat itself.

Meanwhile, Drac’s daughter, Mavis (Selena Gomez), concerned that her dad is working too hard, quietly organises a family holiday. Even on the decidedly second-rate flight she won’t reveal their intended destination to her father, even though he desperately wants to know. It turns out to be a cruise in the Bermuda Triangle, incorporating the lost City of Atlantis. Drac falls hook, line and sinker for the ship’s captain Ericka (Kathryn Hahn). It’s love at first sight. But Drac’s past run-ins with legendary monster hunter Abraham Van Helsing (Jim Gaffigan) come back to haunt him.

All the old favourites return, including Frank (Kevin James) and his wife Eunice (Fran Drescher); as well as the wolf people Wayne (Steve Buscemi) and his wife Wanda (Molly Shannon). Others include the invisible man Griffin (David Spade), Murray the mummy (Keegan Michael-Key), Blobby (Genndy Tartakovsky) and I shouldn’t forget Drac’s dad Vlad (Mel Brooks). A few newbies are also introduced, including Crystal (Chrissy Teigen), an invisible woman just made for Griffin; and Kraken (Joe Jonas), a ginormous beast who welcomes Drac and his friends to Atlantis.

The characters and situations give the series heart. The visual humour remains (co-writer and director) Genndy Tartakovsky’s signature. He was also at the helm of the first two Hotel T’s and that’s a big positive in terms of keeping the flow going. As a result, each movie moves the story forward, rather than simply dishing up more of the same. But if you haven’t seen the previous films, you can still enjoy Hotel Transylvania 3 on its own merits.

Hotel Transylvania 3 is colourful, kooky and fun and has loads of family appeal. It’s well written and put together and is a most worthy second sequel. I see no reason why Hotel Transylvania 4 shouldn’t already be in the works.