A harrowing dramatic story about a troubled relationship between a son and his alcoholic father, Honey Boy features a series of stellar performances. From a screenplay by Shia LaBeouf, director Alma Har’el brings to life a young actor’s stormy childhood and early adult years, as he struggles to reconcile with his father through cinema and dreams. The film fictionalises LaBeouf’s childhood ascent to stardom and subsequent adult crash-landing into rehab and recovery. Noah Jupe and Lucas Hedges are cast as Otis Lort, navigating different stages in a frenetic career. LaBeouf plays his own father, an ex-rodeo clown and a felon. Artist and musician FKA Twigs makes her feature acting debut, playing neighbour and kindred spirit to the younger Otis in their motel home. 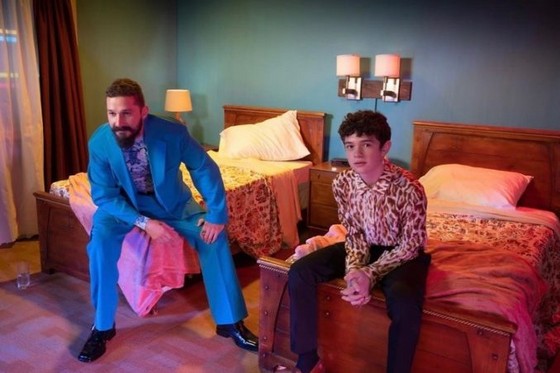 Actor, producer and now screenwriter LaBeouf grew up in the public eye, becoming a seasoned performer by the time he was 10 and a television star at 14, before making it on the big screen. But by 2017, his off-screen behaviour had begun to overshadow his award-winning performances and LaBeouf seemed destined for a path faced by many child stars. Instead, a court-ordered stint in rehab got him back on track. Ordered by a therapist to write about his troubled childhood, especially his fraught relationship with his father, whom he paid to chaperone him, LaBeouf wrote this, his first feature film.

Honey Boy is an intimate account of a father-son relationship steeped in misunderstanding, trauma … and love. The tale unfolds through flashbacks and nightmares while Otis is receiving treatment in rehab.

The actors reach into their souls. LaBouf ensures we quickly detest his parasitic character and the way he treats his son. It’s a nuanced performance showcasing underlying weakness, bullying and abhorrent behaviour – in short, he’s a dreadful role model. The film’s title is drawn from what he calls his 12-year-old.

Hedges brings anger, frustration and despair to his characterisation of the lad as a young adult who – in spite of his successful acting career – has gone down the path of his father before him, turning to the bottle. It has landed him in rehab for a third time, only just spared from jail time. Jupe is outstanding as 12-year-old Otis – torn between trying to please his father (who is long separated from his mother, who is with a new, caring partner who treats Otis well) and avoiding his constant taunts, verbal and physical abuse.

In a small but significant role Laura San Giacomo makes a strong impression as Otis’ consulting doctor in rehab. Bryon Bowers is jovial Percy, a fellow recidivist in therapy and Otis’ chilled roommate. FKA Twigs may not say much, but her connection with Otis as a boy when they both need attention due to the way each of them is treated comes as welcome short-term relief.

Shia LaBouf has carefully crafted a compelling screenplay that drew me in. It required a skilled director to extract maximum impact and Alma Har’el brings a sensitivity to the chaos surrounding Otis.

Art-house in style, Honey Boy may not be easy to watch, but it leaves an indelible mark.