Sam Esmail has become something of a TV god following his (rightly) acclaimed Mr Robot. I mean, the guy basically came from “nowhere” to make one of TV’s best series, not to mention making Oscar winner Rami Malek a star. His latest offering is Homecoming, a project that’s very different from Mr Robot, yet also shares some of its key traits. 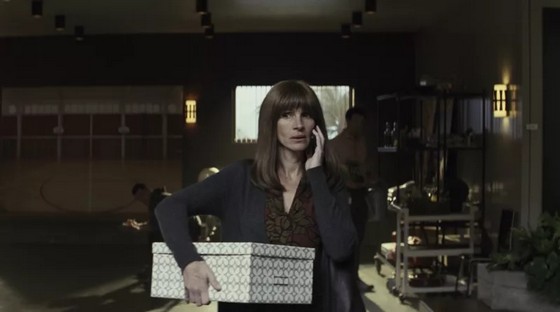 The Homecoming of the title is a facility in Florida for US soldiers returning from overseas deployments. Heidi Bergman (Julia Roberts) is a counsellor with Homecoming. Her job is to interact with the veterans and help them through their “transition” to civilian life. One of her charges is Walter Cruz (Stephan James). The charming Walter quickly develops a rapport with Heidi. Colin Belfast (Bobby Cannavale), an executive with the company that runs the facility, oversees the Homecoming program. He communicates regularly – by phone – with Heidi. But his frequent ramblings don’t really help Heidi understand her role.

In a different time-line five years into the future, Department of Defense investigator Thomas Carrasco (Shea Wigham) is investigating what happened with Homecoming. Obviously, something has gone terribly wrong. He contacts Heidi, now a waitress, but she’s reluctant to divulge much. But some discrepancies in paperwork mean the dogged Carrasco isn’t about to simply let everything slide. He starts digging ever-deeper into Homecoming’s murky past.

Homecoming is a web of hidden agendas, naivete, poor management and dark secrets. It’s a heady mix; but Esmail keeps it all on the rails (along with co-creators Micah Bloomberg and Eli Horowitz). The series certainly isn’t a Mr Robot re-boot; but it has several Esmail trademarks. Key among them is that disturbing undercurrent. It’s hard to put a finger on exactly how Esmail does it, but you’ll recognise it when you see it. Esmail’s also clearly a fan of the unreliable narrator; and we get not one but three of them here. Indeed, Carrasco is the only character really interested in the truth.

Like Mr Robot, Homecoming exists in a world that looks very much like ours, but there’s something a little off. It delves into some important issues regarding the care of returning soldiers and corporate misconduct, but also veers into stuff you really hope is fictional. Esmail accentuates this disconnect visually by shooting the “present” and “future” segments in different aspect ratios. ‘

Part of Homecoming’s genius is the sheer economy of its storytelling. The whole season is 10 half-hour episodes – more than binge-able in a weekend. In fact, I think this is one of the few series I’d really recommend bingeing, because it plays out so strongly. And in each of those 10 episodes, not a minute is wasted in any of them.

Julia Roberts (Ben is Back) has left her Pretty Woman image behind to play the fragile but world-weary Heidi and, as expected, delivers. She’s well matched with the charismatic Stephan James (If Beale Street Could Talk) as Walter. Shea Wigham (Bad Times at the El Royale) is excellent as the persistent Carrasco. But Bobby Cannavale (Ant-Man and the Wasp) just about walks away with the acting honours on the show as the driven Colin Belfast.

If you loved Mr Robot, chances are you’ll love Homecoming too. But even if you’re coming to this cold, Homecoming delivers a rich tapestry of a drama that’s well worth your time.