There is something so satisfyingly retro about shows featuring kids doing their own thing, and doing it masterfully, without the grownups being entirely savvy as to what their clever and resourceful progeny are up to.  Home Before Dark is especially intriguing as it is based on the true story of Hilde Lysiak,  a talented American teenager with both the skill and a passion for crime reporting. 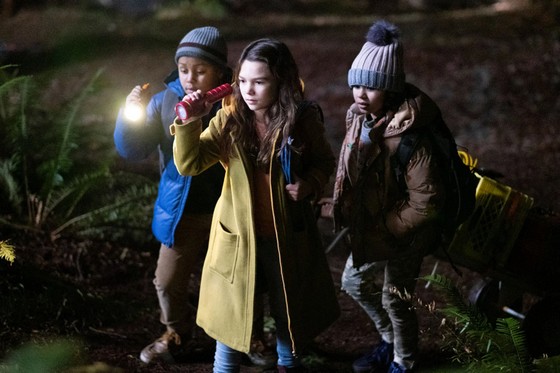 The events of Home Before Dark take place in the year that the Lisko family re-locate, and junior reporter Hilde is just nine years old.  Hilde (Brooklynn Prince) is the middle child of three daughters to Matt and Bridget Lisko.

Opting to do what he said he’d never do, which is return to the home town that once spurned him, newly unemployed journalist Matt Lisko (Jim Sturgess) has a bit of explaining to do to his family.  Moving back into Matt’s childhood home is a money saving option for the family of five, and Matt’s own father has just been given the big punt to a care facility.  Dear old Dad (Reed Birney) may make a habit of escaping, but there is a very good reason for that.

The abduction of Matt’s friend Ritchie when Matt was a teen has a lasting impact. Called to testify as a witness, the teenage Matt is put on the stand and gives his honest testimony as to what he saw and heard the night that Ritchie was snatched off his bike and bundled into a van.  With a suspect in custody, the town didn’t want to hear that the person arrested was not the abductor, and incarcerate the accused regardless.

When Hilde reports on the murder of a local woman in her new neighbourhood, she realizes there is an item missing from the crime scene that she had spotted when visiting the woman’s yard sale the day before. It is a video recorder, and the cassette inside of it was meant to be seen by Hilde’s father.

Home Before Dark is definitely family viewing, perhaps for tweens and up.  Adults will find that the mystery elements of both the current murder and the cold abduction case is enough to keep them in their seats, and your kids will appreciate a group of nine year olds ignoring what they have been told to do and getting on with being tricksy little kids.  Hilde is a powerhouse of determination, and her earnest belief in her mission and her own abilities is never a bad thing for the world to see in its youth.  Brooklyn Prince is a young actor capable of great intensity, so it will be interesting to see where her career takes her after this series.

It is a bit tricky to place the time period in which the show is set, as the kids all dress like they came out of the midwestern 80’s though they are also carrying smartphones.  As you would expect, the child characters get all the best lines. This is not to say that there we are not dosed with repeated cringeworthy declarations about being truth seekers and of the importance of maintaining journalistic integrity – but in these odd times, who knows, maybe you’ll find that somewhat reassuring.

This TV adaptation has taken the usual artistic licenses, wiggling away from many of the particulars of real life junior reporter Hilde Lysiak. Hilde is now aged thirteen, and she’s been one busy junior journalist in all the years since.

Home Before Dark is a ten part series available to be screened in its entirety now on Apple TV+.  The filming of Season Two, stalled due to the COVID-19 crisis, is now expected due to drop somewhere around the latter half of 2021.