His and Hers, and whoever that other person is.  Television presenter Anna Andrews, DCI Jack Harper and an unknown observer all contribute to this twisted tale of murder and treachery that has its origins in past cruelty inflicted by English school girls.  The very thought of it. 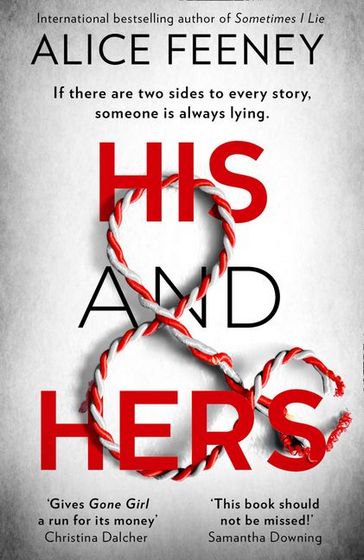 Anna Andrews has the breath knocked out of her when she is unexpectedly booted from her position as the weekday presenter of the local television news. To be fair, Anna was only the warming the seat of the previous presenter who had experienced back to back pregnancies, but after two years, Anna had assumed that her position she was safe.

The callousness into which she is turfed back in the pool of the news team smarts, but Anna needs to quickly push all those dark thoughts down in order to keep her job. Sent to report on the finding of a woman’s body in the quiet village of her childhood, Anna is horrified to see that her ex is involved in the investigation, and that things at home are not what she expected either.  Anna’s mother has been living on her own for some time, but the family home now looks like something out of a horror movie.  Finding out that her ex has had full knowledge of the decline is another nail in the coffin of what is left of a marriage that failed to survive the death of a child.

Not being able to shake the sense that someone is riding coat tails on her coverage, Anna’s drinking problem means that at first she disregards these suspicions.  After the second murder, and the third, Anna is certain that someone is doing some cleaning up. All of the victims were known to her.

Before you get your groan on, because yes I know, there are SO many novels out there at the moment that sound exactly like the above – I promise His and Hers is a cut above.  His and Hers falls somewhere between domestic suspense and psychological thriller. The police procedural fan in me appreciated His and Hers, as the novel could have worked within those parameters alone.

The roots of all evil here can be found within the close circle of family and friends (or ex friends, as is the case in this book).  With purposeful malice seething from the very first passages, His and Hers makes it obvious upfront that not only is someone going to royally cop it sweet, but also that there will be a jolly good reason why it was deserved.

Even if you feel that you’ve filled your quota of thrillers in iso, do give this one a whirl. The characterization of His and Hers is quite strong and I would love to see the main characters again in another novel. It would be interesting to see how the three manage to move on past the massive rents in their relationships, caused by such horrific shared experiences.

What is some very clever linkage, in hindsight, makes me feel fairly confident that most readers will not see the final twist coming. It was there all along, seeded judiciously, so much so that I had to backtrack several times to verify why I had made so many assumptions earlier on.  It does seem at the half way point that we are reading another variation on a ‘Carrie’ theme, in that the cruelty of school children can escalate to the ultimate revenge of bloody murder.  The wrap up of everyone in the same space at the same time is satisfyingly reminiscent of a horror movie outlier.

His and Hers is the third novel for British author Alice Feeney and is published by Harper Collins Australia.