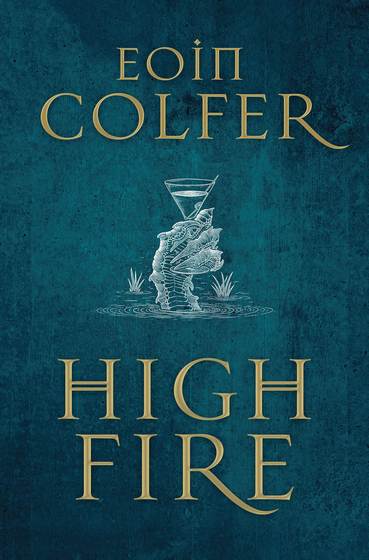 Eoin Colfer is best known as the author of the highly successful children’s fantasy series Artemis Fowl. This series, pitched squarely at the older child market, features a ten-year-old super rich, hyper-intelligent, criminal mastermind who finds and takes on a technologically advanced fairy world. But the first Artemis Fowl book came out in 2001, putting Colfer’s early readers now somewhere in their thirties. Colfer has done other things – including a Hitchhikers’ Guide to the Galaxy book and some Irish noir crime – but he is still pumping out Fowl-related content and there is an Artemis Fowl movie on the way. This brings us to Highfire, which keeps Colfer squarely in the fantasy realm but pitched at an older audience.

Squib Moreau is a fifteen year old Cajun kid living with his mother in the bayous outside of New Orleans. After a run in with Regence, the violent corrupt local policeman, who also has designs on his mother, Squib encounters Vern, short for Wyvern. Vern is the last of the dragons, living secretly in the middle of the bayou and spending his days drinking and watching TV. Despite his better judgement Vern (who also speaks English), takes Squib on as his helper. But Regence is soon onto them both and after factoring in his own plans to take over the local drug trade, soon all hell is going to break loose.

This is definitely fantasy for an older audience than the Artemis Fowl books, but that older audience is more likely to be late teens. The tale itself is a simplistic mismatch buddy comedy (dragon and boy) and the story beats are fairly easy to predict. The main character, Squib, is a fifteen year old: “that special age where he was young enough top believe what he was seeing, and old enough not to entirely freak the hell out” – so pitched for a YA readership. The other human characters are either bad (Regence and the Italian crime boss he works for or the goons he hires for the final showdown) or good (Squib’s angelic, understanding nurse mother). There is plenty of swearing, copious references to genitalia, and lots of violence but nothing that the average late teen does not see on television every day.

Robert Goodman
For more of Robert’s reviews, visit his blog Pile By the Bed