Wonderful music, a kaleidoscope of colourful costumes, warmth and good humour permeate the Playhouse in a showcase of talent that is Hello, Dolly! circa 2017. Lyrics and music are by Jerry Herman and a book by Michael Stewart. The show is based on Thornton Wilder‘s 1938 farce The Merchant of Yonkers, which Wilder revised and retitled The Matchmaker in 1955. The story is just so much fun. 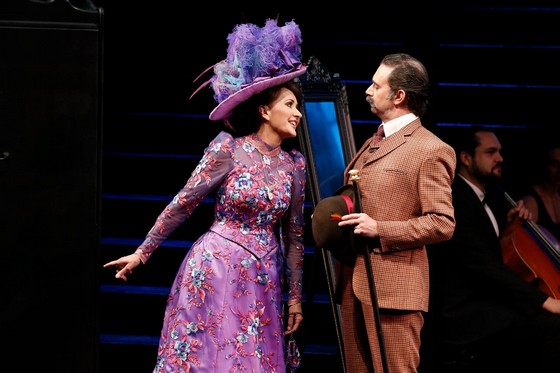 It is the 1890s and Dolly Levi is an upbeat, controlling, middle-aged widow who just loves to meddle. A matchmaker, she also manages to be adept as just about everything, including dance instruction. Levi decides the time is right for her to marry again and sets her sights on a well known but grumpy, affluent businessman, Horace Vandergelder. Vandergelder also has a weepy neice and two employees that get involved in the shenanigans in this feel good escapade set in Yonkers and New York City.

Hello, Dolly! opened on Broadway on January 16th, 1964, with Carol Channing in the lead role. It premiered in the West End on December 2nd, 1965. Mary Martin was Dolly.  The first Australian production was mounted by JC Williamson’s and featured Carole Cook, while The Production Company initially presented Dolly! in 2002, when the title role went to Amanda Muggleton.

Cinematically, Gene Kelly directed the 1969 film that starred Barbra Steisand, Walter Matthau and Michael Crawford. It was nominated for seven Academy Awards and won three, including Best Music. And now Marina Prior crackles as the delightful, the delicious manipulator. Prior remains my all time favourite musical theatre performer – pitch perfect here as the whip smart, scheming matchmaker with designs of her own.

Her real life husband Grant Piro (who was also in the original Production Company outing) is the penny pinching, curmudgeonly object of her attention and is putty in Dolly’s devious hands. Among others of note in the 18-strong cast is Glenn Hill as Vandergelder’s senior clerk who falls for the milliner that Levi first introduced to Vandergelder, a role filled by Verity Hunt-Ballard. 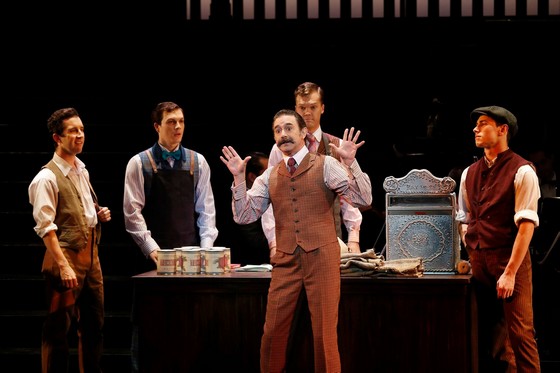 With musical direction from Vanessa Scammell, the 14-piece company orchestra does a glorious job with the material at hand, with several showstoppers amongst them. The costumes (the costume designer is Isaac Lummis) are a sumptuous feast for the eyes – bold, bright and creative. Choreography (the choreographer is Kirsten King) is another feature. The key scene involving waiters is superb.

Directed by Gary Young, Hello, Dolly! is most entertaining – melodic, very funny and utterly charming. In fact, having seen most of The Production Company’s fine offerings, this is right up there with the very best of them. It is just a pleasure to be in the audience with a warm smile on your face. Do not miss it.

The Production Company’s Hello, Dolly! is playing at the Playhouse, Arts Centre Melbourne, until 11th June.