A beautiful woman engages an older man in conversation … Sounds like the start of a joke, but it’s actually the beginning of the MTC’s production of Heisenberg. This story involves a couple of lonely people. One has been alone … seemingly forever; while the other has a deep-seated need for connection. 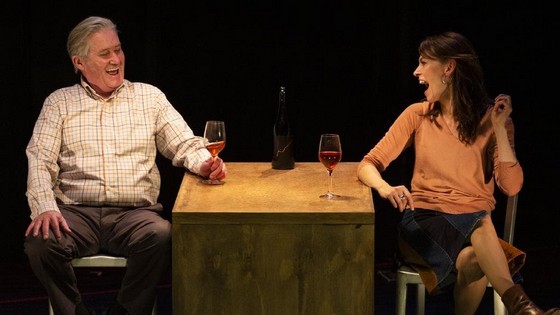 The woman, Georgie Burns (Kat Stewart) is alluring. She talks a lot. She’s a 42-year-old American and a receptionist at a school. The 75-year-old man, Alex Priest (Peter Kowitz), is a butcher from Ireland. He’s far more circumspect. He doesn’t say all that much, at least initially. But even after he gets to know Georgie more, he’s not concerned about leaving a little white space. But just why is this woman coming onto him? But in spite of her brazenness (perhaps because of it) he’s finding it increasingly impossible to resist?

After their initial chance meeting at a London railway station, she seeks him out again days later. There’s more here than meets the eye, but what?

Georgie is a force of nature – beautiful and irrefutable. Once she’s ingratiated herself into Alex’s life, she’s seemingly there to stay. Alex didn’t know what he was missing until Georgie entered his life; but he’s understandably wary. All this talk will see action, as pieces of their lives are gradually revealed.

Told with a minimum of props on a largely bare stage, the time raced. The interactions were intriguing and captivating. I dare say that is in large part thanks to the stellar performance by Stewart, whose presence lit up the stage.

Times and locations appear like chalk markings projected onto the back of the stage. They work a treat and suit the tenor of the piece. Anna Borghesi is the set and costume designer. 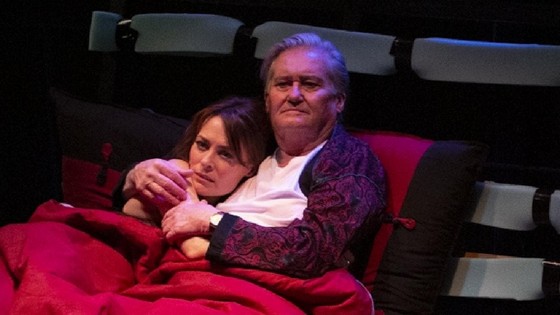 Tom Healey directs while Jarryd Byrne choreographs the action. Writer Simon Stephens skillfully adapted Mark Haddon’s novel The Curious Incident of the Dog in the Nighttime for the stage. The title refers to Heisenberg’s Uncertainty Principle, which helped redefine the world of physics. But Stephens concerns himself not with quantum mechanics, rather with the affairs of the heart.

The Australian premiere of Heisenberg – a witty and uplifting gem – is at Fairfax Studio at Arts Centre Melbourne, where it will play until 3 July 2019.

I saw a preview performance of the production.