As its title suggests, Queensland Theatre’s Hedda is an adaption (by Melissa Bubnic) of Henrik Ibsen’s realist classic Hedda Gabler. The original story is of a scheming Hedda. Just into a marriage of convenience, she decides to destroy the life of an old lover, jealous of his new love affair.

The original story is pretty much still there in this take, although the fresh imagining is outrageously modernised. It’s now set on the gaudy Gold Coast of Bundy-and-Coke, mangos and suburban mega-mansions, paid for from meth. And it’s far from subtle, saturated with swearing and Queensland boganisms from the very first scene. 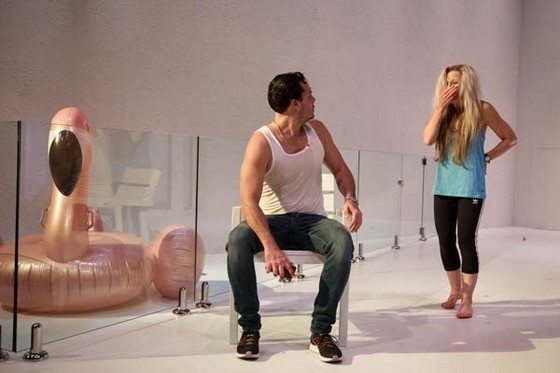 Just as the original play takes place entirely in the Tesman’s living room, Hedda plays out completely in the backyard of Hedda (Danielle Cormack) and George’s (Jason Klarwein) ocean-side mansion. The spare staging provides a blinding white backdrop that both captures the Coast’s ‘cash, splash and trash’ and becomes canvas to the colour of the ‘cashed-up-bogan’ attire of leopard prints and Hawaiian shirts.

Just back from a cultured honeymoon in Europe, Hedda is not only beautiful, but bored. The university-educated lawyer and privileged southerner is ambitious only in quest to win a state government tender. She’s willing to risk the consequences of an increased profile. This puts her at more than just cultural odds with her new husband’s crime syndicate family. Their construction and security business ventures are but veneers over their core drug interests and corrupt dealings.

In a storyline that could have been straight out of Underbelly, we soon learn that loyalty brings rewards, but also paranoia. A lot of time is spent establishing the context of this world and its characters; at the expense perhaps of the blood-soaked tale’s later more gripping human dramas. Still, tensions are evident early on, despite none of the characters being particularly likeable. (Though performances present them as more than just the sinister characters they could easily have been.)

Klarwein is powerful as the vibrant Jason. Jason is fearful of being sidelined in the business by just-out-of-prison Løvborg (Jimi Bani). But he’s committed to his family and wants to both please and control his self-indulgent wife. This was one of my favourite of his performances. Klarwein dominates scenes by his presence, as a man driven by power and pride.

There are many strong performances from within the deluxe cast. Almost unrecognisable, Andrea Moore is deliciously uncouth as George’s gutter-mouthed Aunt Julia. The aunt is suspicious of Hedda and her people because she’s never been further than Bali, let alone to Europe. Although crass, her observations and insults are witty. However rapid-fire dialogue means that the audience’s laughter is sometimes at the expense of following speech.

Bridie Carter gives an ultimately emotionally-gripping performance as the vulnerable Thea. Daughter of an unseen crime leader, she lives a quiet life in Byron. She’s recovering from addiction until her violent partner reappears. Carter makes Thea’s story tragically compelling, however, it still is paled by that of our titular anti-hero. 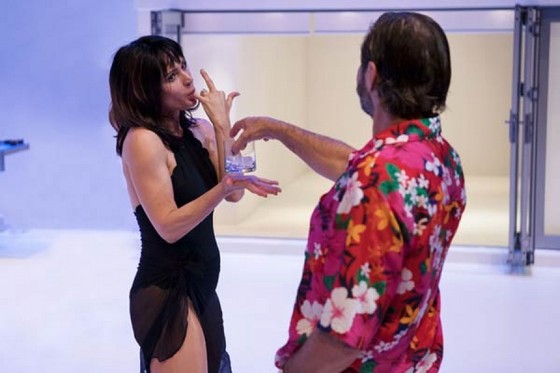 Cormack’s Hedda is certainly enigmatic. She goes from being malicious manipulator to feminist firecracker so easily that it’s difficult to determine the core of her character. And her claims to have worked too hard to be owned by a man emerge more as a self-serving afterthought than ongoing thematic motivation. Connection with the story is also distanced by too much subtlety around her former relationship and the lack of an ongoing sense of her entrapment.

While this Hedda has some agency, she seems to want power for its own sake rather than for a particular purpose. She’s unsympathetic, with problems of her own making. Enough of Isben remains to recognise the work’s homage to its origins, even with its powerful contemporary voice. The juxtaposition of these ideas is probably going to polarise people. Many of the Monday night subscription crowd, for example, were not particularly impressed. Potential audience members need to heed warnings about its strong coarse language, adult themes and graphic imagery, before heading in to form their own opinions.