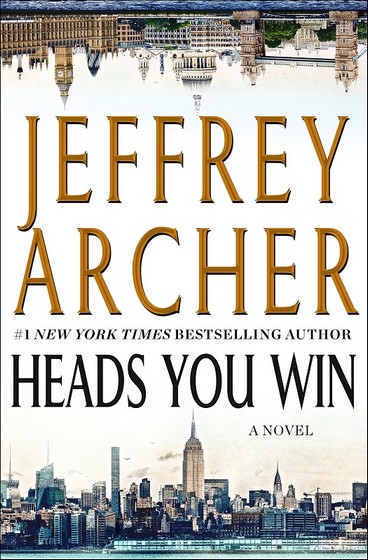 Anyone who enjoyed Jeffrey Archer’s seven volume Clifton Chronicles will lap up his latest rags-to-riches tale which contains all of the familiar elements of his novels. It is his first stand-alone novel in a decade as the Clifton Chronicles has taken up most of his time. There is a virtuous young hero who makes his way through the world of banking and politics, making loyal allies and duplicitous enemies along the way. But as is typical of Archer, his central character is noble, resilient and very clever. There are beautiful and intelligent women. And the main villains are nasty and without any redeeming features whatsoever.

Heads You Win tells the story of Alexander Karpenko, an ambitious teenager raised in Leningrad in the 1960s. His father ran the docks but had ambitions to organise the workers into a union. But after his father was killed by the KGB, Alex and his mother were forced to flee Leningrad to save their own lives. On the docks they had to make a choice between a boat heading for England or one heading for America. A toss of the coin would decide their fate.

It’s at this point that Archer gives his story its Sliding Doors structure. One narrative strand follows Alexander (or Sasha as he is known) and his mother as they head to England, while the other strand follows them as they head to New York. Alex is driven to succeed. In England Sasha is a gifted student who becomes involved in politics. In New York, Alex shows his entrepreneurial spirit and eventually becomes involved with the rich Lowell family from Boston and their dark secrets, and ends up as a banker. In both cities though Alex’s formidable mother Elena draws upon the skills she plied working in the canteen on the docks of Leningrad to work her way up to owning a couple of restaurants.

But Sasha and Alex also dream of following in his father’s footsteps and has ambitions of returning to Russia to become elected as its first democratic leader. There are enemies driven by greed, jealousy or a desire for revenge that set out to destroy Alexander along the way.

The novel and its backdrop have clearly been well-researched, and Archer draws upon some of his own experiences of politics to shape the novel. He gives us a snapshot of social and political changes across three decades in both Europe and America with Vietnam, the changing face of Russia as it moves from communism and its repressive regime to glasnost and the rise of the powerful oligarchs. There are a lot of pop cultural touchstones, and even some cameo appearance from Robert and Edward Kennedy, Margaret Thatcher, Tony Blair and Vladimir Putin.

Heads You Win contains many of the familiar elements that made up the Clifton Chronicles, but it also draws on elements from earlier works such as Kane and Abel. But it is still a gripping page-turner and makes for engaging reading. However, the ending seems rushed. The conclusion is a little contentious and a little confusing and disappointing. Maybe Archer is paving the way for a sequel?

Nonetheless, I flew through the 470 pages in under two days. Archer’s fans will not be disappointed.