Happy End is another typically downbeat drama from misanthropic Austrian filmmaker Michael Haneke (The White Ribbon). Set in the coastal French town of Calais, the film follows the affluent but dysfunctional Laurent family. Haneke works in heavy themes of death, power, the refugee crisis, social media and class. And despite the title, there is no happy ending for this fractured family and their poisonous relationships. 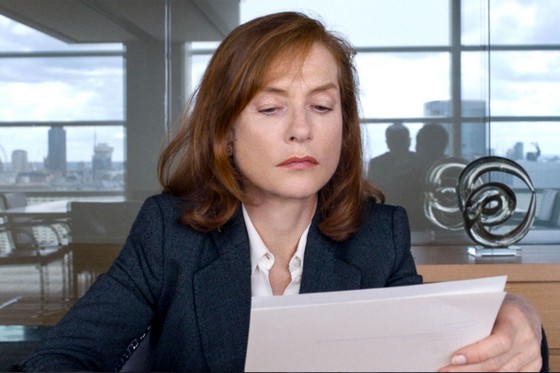 Ailing family patriarch Georges (Jean-Louis Trintignant) has handed over the control of the family’s construction business to his hard-nosed workaholic daughter Anne (Isabelle Huppert). He’s looking for a way to commit suicide before his memory and faculties fail him. Anne’s son Pierre (Franz Rogowski) is an alcoholic. He resents his family’s wealth and the way they treat the immigrant community of Calais. Anne’s brother Thomas (Matthieu Kassovitz) is a respected doctor, but his personal life is a bit of a mess. He has unhappily remarried, but is now separated and conducting a torrid online affair. Thomas struggles to care for his deeply unhappy 13-year old daughter Eve (newcomer Fantine Harduin) after his ex-wife dies.

A collapse at a Laurent building site seems to trigger a series of crises that tear the family further apart. But as is Haneke’s usual style, much of the actual drama takes place off-screen. Haneke’s regular cinematographer Christian Berger employs his usual static camera, long takes, and tracking shots to record the drama. All of this keeps us at an emotional distance. Plot threads are suddenly dropped.

This is typically austere filmmaking from Haneke. He seems fascinated with the darker side of human nature and dissecting bourgeois values. The material here is tempered with his trademark stylistic touches – sudden outbreaks of shocking violence; seemingly irrelevant discussions; abrupt jumps between scenes; and some pitch-black comedy to temper the bleak mood.

All the characters are callous and contemptible. Huppert (The Piano Teacher), in her fourth film for Haneke, brings a coldness to her portrayal of Anne. Kassovitz (Valerian) is restrained as Thomas, while Rogowski brings a sullen and volatile edge to his performance. Harduin delivers a mature and intense performance as the troubled Eve. Trintignant (Amour) brings a detached touch to his senile octogenarian patriarch. Haneke wrote the part specifically for the legendary French star. Toby Jones manages a hint of empathy as Lawrence Bradshaw, Anne’s latest boyfriend. He’s a British lawyer brought in to negotiate a resolution to the lawsuit after the building site collapse.

Happy End is an indictment of modern western society and the worst aspects of human nature. It riffs on many of the director’s previous films. But ultimately this is a somewhat flat and ambiguous film. And Haneke’s grim world view will not be to everybody’s taste.