Clever, zany and funny, Happy Death Day 2U ticks all the boxes for a sequel. I loved the creativity in the original and feared that any follow-up would be a disappointment. Fortunately though that’s not the case because the writer and director Christopher Landon has taken the finest elements of the initial offering and twisted the dagger (pun fully intended). Much rests on the talents of the lead actress Jessica Rothe and she delivers. 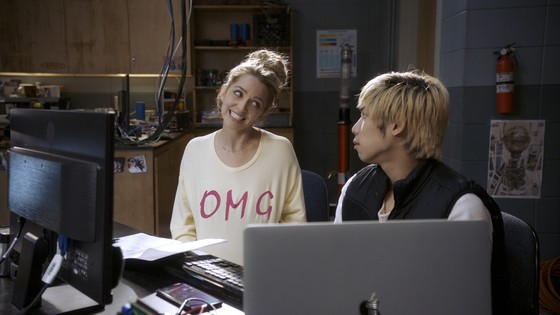 When we last saw Tree Gelbman (Rothe) she saved herself from a death at the hands of her roommate Lori (Ruby Modine) as she kicked the psychopath out of the Kappa Nu sorority window. Tree’s never-ending birthday (think Groundhog Day) was finally over and she managed to start a new life … swearing to never repeat her old mistakes. Or so she thought. No sooner has Tree said goodbye to the endless loop and begun a promising new relationship with Carter (Israel Broussard) than she realises that solving the puzzle of her bizarre (non)murder has had unintended consequences.

Carter’s roommate, Ryan (Phi Vu), has spent his college years building a machine to prove that time can be slowed down. Now Ryan and his team are close to perfecting the device. Unfortunately though not before causing mayhem at the university. Its dean Roger Bronson (Steve Zissis) finds his tolerance of the resultant blackouts has worn out. When Tree wakes up to what’s happening, she’s once again caught up in the time warp – in this case a parallel version of the real world.

Over the top? You betcha. Does it all make sense? No. But neither did the first one. And you can have so much fun with the material, that’s immaterial anyway.

Importantly, the key cast members from the original are back for more hijinks. Some of the lines and scenes are priceless; and the key trope – a frightening baby mask – remains. You’d think that knowing who the murderer is – an early reveal – would make the film lame. But no. Instead, the filmmakers have gotten more imaginative. That includes finding novel ways for Tree to kill herself – which is nowhere near as maudlin as it sounds.

So, approach Happy Death Day 2U with the right attitude and you’ll get the most out of it. I should mention: it is crucial for you to have seen the first film before seeing this sequel.