A  man who lived the kind of life he wanted inspires the feel-good Hampstead.

The setting for the film is breathtaking. Hampstead in London is famous for its beautiful and much-loved heath – a piece of quiet countryside in a vast metropolis. Living on the edge of the heath is American widow Emily Walters (Diane Keaton). Since her husband’s death, she can’t quite focus on the things that need attention – like her crumbling apartment, diminishing finances or, even, her son, Philip (James Norton). Despite encouragement from her friend Fiona (Lesley Manville), she doesn’t want to admit that she’s merely drifting through life. 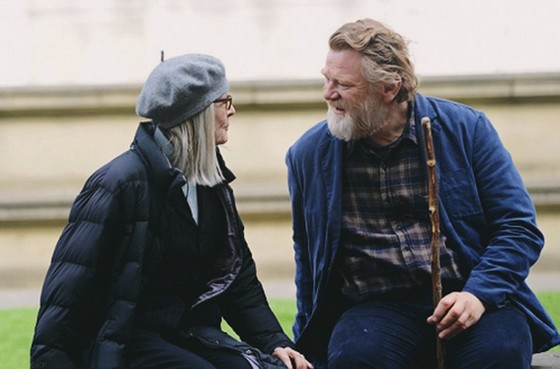 Everything changes though when she meets the eccentric, unkempt Donald Horner (Brendan Gleeson). Horner has lived in a ramshackle hut on the heath for 17 years. Now, property developers are attempting to evict him. Walters steps up to defend Horner in the escalating battle. She soon finds that, despite his gruff exterior, there’s something special about this gentle and unconventional man.

Hampstead is a warm, funny tale about two very different people who discover that age is no barrier to second chances. The film originated with a 2007 news story about Harry Hallowes. This led one of the film’s producers to contact screenwriter Robert Festinger (In the Bedroom), who was fascinated by the story of a man who was living rough on Hampstead Heath.

While the “fighting establishment” plot is compelling, the way it unfolds feels somewhat contrived. That especially applies to much of the characterisation. It seems like a heavily romanticised version of any truth that may underpin it.

Walters, for instance, is, on the one hand, ditsy and appears severely out of her depth. Then just as quickly she is clear-headed and in control. A couple of secondary characters are painted as arrogant and scheming, more caricatures than characters.

As might be expected, there are a number of plot twists. It’s not always beer and skittles in the evolving pairing of Walters and Horner.

In spite of all I have said, Hampstead has heart and is likely to appeal to an older audience. Rated PG, it scores a 5½ out of 10.