I love Hamlet; it’s my preferred Shakespearean tragedy. Visiting its Kronborg Castle setting was my favourite of all days when touring in Denmark. There’s something rotten in the Denmark of this ultimate revenge drama though. After his father’s death, Prince Hamlet (Silvan Rus) is overlooked for the crown in favour of his uncle, Claudius (Ben Prindable), who has not only killed Hamlet’s father but married his mother Gertrude (Liliana Macarone). In the complicated plot the follows the Danish Prince feigns (or perhaps not) insanity, kills his ‘girlfriend’ Ophelia’s (Sarah Doyle) father, the elderly Lord Chamberlain Polonius (Frances Marrington), drives Ophelia to madness, directs a play within a play and takes revenge on his uncle, at the cost of almost every life on stage.

From the outset, Hamlet suspects foul play around his uncle’s coronation, which is confirmed to audiences as the Queensland Shakespeare Ensemble production begins with a ghost. With Hamlet’s loyal friend Horatio (Dudley Powell) as witness, the apparition of Hamlet’s father appears, evocatively lit against backdrop of the Roma Street parklands (as both audience are seated and the majority of the performance takes place on its amphitheatre stage). Abridged a little (because who has time for all 4000 lines of this, the Bard’s longest play), but with only authenticity in those scenes that are presented, this “Hamlet”, under the direction of Rob Pensalfini makes some interesting choices, particularly in play with the characters. Although in his famous Act Three nunnery scene ‘soliloquy’, the Prince ponders the pain and unfairness of life as ‘the question’, uncertainty is evident in many characters whose worlds have shifted.

Minor characters bring much to their moments on stage. And as the new King, Prindable makes for an almost likeable, more than calculating Claudius. Still, he is very statesmanlike in his manner, enunciating the text well, which sees the show off a solid start. Also notable is Powell, as the harbinger of truth, Horacio, Hamlet’s one true confidant. Together they balance each other’s essential sensibilities, in scenes that ground the play in reality. Indeed, their relationship is interestingly the one that conveys the most on-stage chemistry. 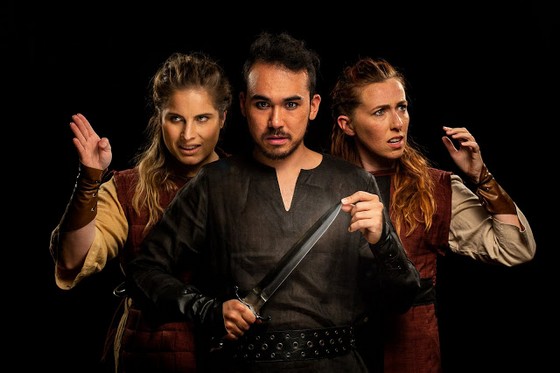 Rus is exciting to watch in one of the most challenging of titular roles. His idiosyncratic energy never wanes as he speaks more (by a ratio of two to one) than any other character of the Shakespeare canon. Initially emotional and then apparently quite mad, his Hamlet is far from an original-emo type protagonist. Instead of wallowing in melancholy, he is the ultimate anti-hero, intensely passionate in both contemplation and sardonic contempt, but also ambitious and unreliable due to his own destructive mindset. And Rus’s stagecraft is impressive, especially in Act Five’s sword fight with an avenging Laertes (Nick Rijs), which thanks to Justin Palazzo-Orr’s fight direction serves as a real highlight. Gender-blind casting sees Marrington as Polonoius, who not only shares the introspective but ironic maxim ‘to thine own self be true’, but interacts energetically with the audience without necessarily entirely breaking the fourth wall, which both adds humour and enhances authenticity.

Comedy features throughout the work. The Gravedigger fool (Rebecca Murphy) of the tragedy’s final act, provides some delightfully simple but effective visual comedy and also quick-witted dialogue with Hamlet ahead (#punintended) of discovery of the skull of the castle’s beloved jester Yorick. And, as has been the case in many of QSE’s previous shows, there is a deliberate emphasis of the play’s crude puns. As he flirts with madness, Hamlet is persistent and less-than-subtle in his inappropriate humour, in revelation of his fundamental sanity. But humour is found not only in dialogue, but also in the physicality added to the spaces in between the script’s words. And the melodramatic re-enactment by players of Hamlet’s fathers’ death in a play within the play, The Murder of Gonzago, about a murder in Vienna, is a real riot.

Live music is also again used to memorable effect, transitioning scenes and evoking an apt emotional palette. Although staging is sparse, there is an apparent attention to detail down to the prominence of Danish flags always on stage in show of the macro politics at play along with the narrative’s essential family dynamics. Setting also again serves almost as a character itself with the eerie shadows and sounds of a wintery parkland adding to the atmosphere (rug up for a comfortable experience).

Not only was Hamlet one of William Shakespeare’s most popular works during his lifetime, but it still ranks among his most performed, so one could easily label it a safe production choice, with which a company can’t go wrong. This is, however, far from true, although not in this instance. Not only have the Queensland Shakespeare Ensemble presented an engaging take on one of the most powerful and influential works of world literature, but in a first for the company, the ensemble of 15 actors will present it in ‘rep’ with Rosencrantz and Guildenstern Are Dead, Tom Stoppard’s absurdist, existential tragicomic expansion on the exploits of the two (minor) courtier characters from Hamlet, alternating shows each night with actors playing the same role in both plays. As Rozencrantz himself says, “their endeavor keeps in the wonted pace” and as audiences we can only reap the benefits of the company’s ambitious 2018 parkland provocations.

The Queensland Shakespeare Ensemble’s Hamlet is playing at Roma Street Parklands from 23 August to 9 September 2018.