The unique talent that was Geoffrey Gurrumul Yunipingu is showcased in this reverential documentary written and directed by Paul Williams. 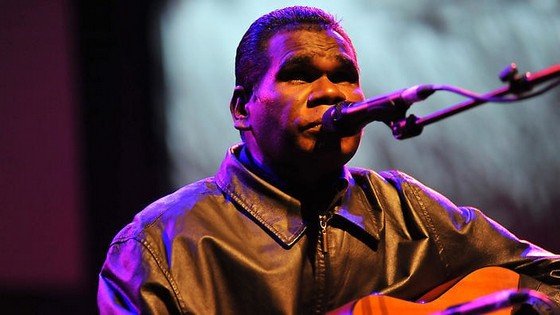 Gurrumul is known as a band member of Yothu Yindi; and a supreme artist in his own right. He spoke little, but said so much through his evocative music. More often than not he let his producer and good friend do the talking for him; and their relationship is mighty special. Blind since birth, the Indigenous performer had a musical command most could only ever dream of. Feted on the world stage, he remained most at home with family and friends … around people he knew and cared about. A shy man, he shunned the limelight, even though the likes of Sting sought him out.

Gurrumul is a portrait of one of Australia’s most celebrated and important voices. He who found purpose and meaning through music inspired by his community and country on Elcho Island in Arnhem Land. His breakthrough album Gurrumul sold half a million copies. But it brought him to a crossroads as audiences and artists around the world began to embrace his music.

Gurrumul played to royal families and for world leaders, including Barack Obama and Vladimir Putin. He performed with not only Sting but with Elton John. Rolling Stone magazine declared him “Australia’s Most Important Voice” in April 2011. Quite an accolade for an artist who didn’t speak publicly and sang in a language only a handful of people understand. Despite his success, Gurrumul lived a traditional indigenous life as far away from the trappings of fame and fortune as possible.

Into this world stepped Mark Grose (Gurrumul’s manager) and Michael Hohnen (his musical collaborator). After stumbling across the raw musical talent of Elcho Island in 1996, together they formed the SkinnyFish music label (based in Darwin) to help preserve the music they were hearing. They had no idea at that time that they would discover a voice that would penetrate so widely, and were completely unprepared when it did.

Gurrumul then is the story of an artist on the brink of global reverence. It explores the struggles he and those closest to him faced in balancing what mattered most to him and keeping the show on the road. The doco spends considerable time focusing on the man’s roots and cultural heritage. His mother, father and, above all, his aunty show a great deal of pride in him and his achievements. The haunting sounds of Gurrumul’s music are nothing short of astonishing. More than anything else, that’s what I will remember.

The documentary, while telling, is too long. It didn’t sustain its 97 minute running time. And there was no explanation of how and why he died so young. Why not? A quick Google search reveals that, but surely a documentary about someone’s life deserves the complete picture. So, as compelling as Gurrumul is, it could so easily have been even better.