Harold is in for a few very bad days – and things aren’t likely to get better any time soon. Nash Edgerton directs his brother Joel in in Gringo. This over-the-top comedic crime caper has more twists and turns than a rollercoaster. 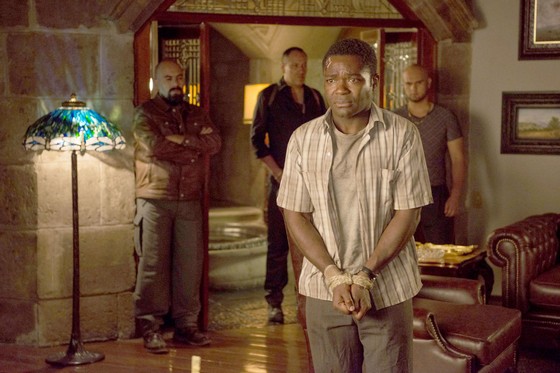 Mild-mannered pharmaceutical company executive Harold Soyinka (David Oyelowo) has never questioned his boss’s intentions. After all, Richard Rusk (Joel Edgerton) gave him a job and calls him a friend. But all that’s about to change. Harold’s accountant tells him that he is as good as broke because his wife, Bonnie (Thandie Newton) is spending big time. The accountant is alos hearing rumours that Harold could be out of a job soon because his firm is about to be sold to a large conglomerate. When Harold confronts Richard with this, Richard tells him not to worry.

Instead, Richard and fellow exec Elaine Markinson (Charlize Theron) – who’s in a torrid relationship with Richard –  accompany Harold on a business trip to Mexico. There the trouble really begins – as Harold becomes the target of a drug kingpin and his lackeys. But they aren’t the only ones who want a slice of the action. Suddenly, Harold’s life is being torn apart.

It’s difficult to know which character is more crooked … except that Harold is the naïve good guy; and some of the baddies are more horribly bad than others. Gringo is a fun-filled romp that relishes excess in its various incarnations. One thing is for sure, tempered behaviour is not part of the offering.

Charlize Theron (Tully) positively sizzles as the vixen of the piece. She certainly knows how to have fun in a picture; and when excess is called for she gives it her all. Many others, too, join in the hijinks. But none measure up to Theron, although I thought David Oyelowo (A United Kingdom) played his part well, ensuring the audience was on his side all the way.

Gringo has the ability to divide audiences. Some will applaud its irreverence and black humour; while others will feel it descends into pure farce. While I knew the strings were being pulled, I still enjoyed the rocky ride.