Goosebumps 2: Haunted Halloween is a romp in which an innocent act of cleaning rubbish leads to a whole lot of trouble. The first Goosebumps movie was a great box office success in 2015, so a sequel was inevitable. 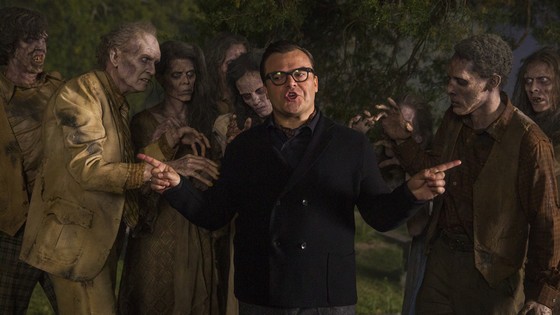 Goosebumps 2 follows the Quinn family – high school senior Sarah (Madison Iseman), her middle school brother Sonny (Jeremy Ray Taylor) and their mother Kathy (Wendi McLendon-Covey). Sonny and schoolmate Sam (Caleel Harris) are best friends with a side job as the “Junk Brothers,” collecting discarded stuff other people don’t want. But it unfortunately leads them straight into the path of Slappy, a mischievous ventriloquist dummy from an unpublished Goosebumps book.

At first, Slappy seems to want nothing more than to be part of the Quinn family. But when his hijinks go too far, Sarah, Sonny and Sam realise that this pernicious puppet must be stopped. Slappy decides to build his own “family” by kidnapping Kathy and bringing all of his Halloween friends back to life, including new right-hand ogre Walter (Chris Parnell). As Halloween transforms their sleepy town into a full-on monster mash, Sarah, the boys and neighbour Mr Chu (Ken Jeong) team up to try to save Kathy and the town from Slappy’s wicked plan.

Instead of limiting themselves to the 200 books by J. L. Stine in the Goosebumps library, the filmmakers decided to bring an original story to the screen, inspired by the series.

Incidentally, Slappy was first introduced in the 1993 Goosebumps book: Night of the Living Dummy. He’s a scary little fellow and precipitates all the misdeeds in the movie. Things get more and more out of control as the film progresses. For a while it appears nothing will bring Slappy to heel. Even J. L. Stine himself (well … Jack Black’s version of J. L. Stine) joins in the action.

I liked the loving but dysfunctional family dynamic that kicked off the movie. Each of the key characters are well realised. Ken Jeong is perfectly cast as a neighbour who doesn’t believe in moderation when it comes to marking  holidays. His over-the-top antics suit the role to a tee.

Written by Rob Lieber (Peter Rabbit), under the direction of Ari Sandel (The Duff) Goosebumps 2 is a creative  follow-up to the original.