Good Boys is Superbad with 11 year-olds. The film follows the misadventures of Max (fresh-faced Jacob Tremblay), a sixth-grader on the cusp of adolescence. He’s best friends with Thor (Brady Noon) and Lucas (Keith L Williams), who refer to themselves as “the beanbag boys” because they like sitting in bean bags. 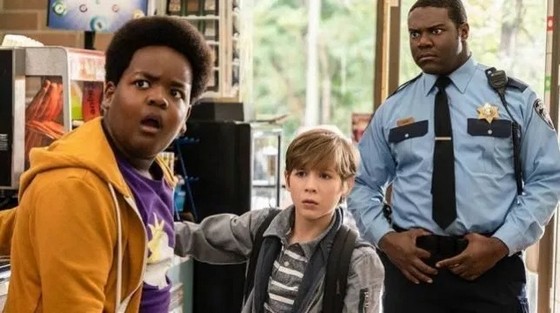 Max has been invited to a kissing party by Thor, the coolest kid in school. He manages to wrangle an invite for his two best friends as well. Max has a big crush on Brixlee (Millie Davis) who will be at the party. Anxious to learn more about the technique of kissing, Max and his buddies set out to learn more about the opposite sex. But learning the finer art of kissing proves to be harder than they thought. Their attempts to expand their understanding involve drones, drug deals with the neighbours, sex dolls, selling a rare trading card to a creepy stranger, wagging school, crossing a six lane highway, and trashing a fraternity house.

Good Boys has been written by director Gene Stupnitsky and his regular collaborator Lee Eisenberg (who both worked on Bad Teacher) and seems to have an innate understanding of the typical eleven year old’s mindset. Most eleven year old probably don’t swear as much as the characters here, nor are they probably as obsessed with the opposite sex. The film is littered with lots of clever one-liners, outrageous and frank sex talk, and visual gags. There is an air of familiarity to much of the humour, which has become a staple of these ribald adolescent coming of age comedies that date back to the likes of Porky’s. But beneath the raunchy moments, of which there are quite a few, the film explores some universal themes and there is an insightful and heartfelt message about friendship, the choices we make, being true to yourself and not pretending to be someone else just to please others.

The three young boys have good chemistry and the dynamic between them keeps the film moving along nicely. Cast slightly against type here with his first foray into comedy, Tremblay (Room) is again strong and likeable. He has plenty of charm. Williams is also good as Lucas, who keeps getting distracted by his parents’ impending divorce. Molly Gordon and Midori Francis are also quite good and bring some spice to the material as Max’s drug dealing neighbours.

Stand out scenes include the one in which the three boys destroy the frat house. Good Boys is certainly plenty of fun, but it will mainly appeal to those who like that whole Judd Apatow brand of R-rated humour.