This feelgood family film is aimed primarily at preteen girls and it explores some universal themes and delivers some positive messages about friendship, teamwork, following your dreams and overcoming adversity. But the central narrative about the triumph of the underdog is somewhat cliched and bland. Going For Gold shares a number of similarities with Raising The Bar, which was set in the world of gymnastics competitions. But rather than bringing home the gold, this amateurish looking production actually lowers the bar and brings home a raspberry. Bring It On did the same thing so much better twenty years ago. 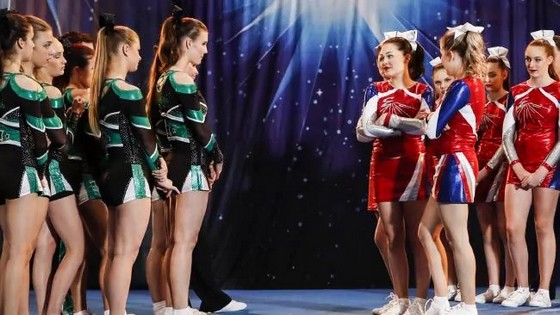 Emma Wilson (Kelli Berglund) is an American cheerleader whose life is turned upside down when she moves to Adelaide with her father, an Air Force officer. She quickly forms a friendship with her next-door neighbour Hannah (Emily Moore), who is also a cheerleader. But thanks to the machinations and plotting of mean girls Abi (Elysia Markov) and Charlotte (Daisy Anderson) Hannah doesn’t really have a squad to compete in the national competition. Emma and Hannah bring together a bunch of misfits to form a team and take on Abi and her champion team. But Emma also feels reluctant to form a strong friendship with this group because she has moved around so much in recent years and fears that she may have to uproot herself again.

Going For Gold is the third feature film for writer/director Clay Glen, who sets his films against the backdrop of gymnastics. But this dull film lacks energy and tension. The choreography also leaves a lot to be desired. The plotting is cliched, with several sub-plots not fully developed. And there is a lack of real insight into the one-dimensional characters. Even worse though is the wooden dialogue that doesn’t ring true and is delivered in stilted fashion by an uncommitted and unconvincing cast. Glen’s direction itself is lazy and uninspired and he trots out a number of clichés without any sense of flair or drama.

The film has been shot by his usual cinematographer Hugh Freytag, but the film has the bland look of a second-rate tele-movie about it as the camera often goes in for close-ups of the actors’ faces as they earnestly deliver their lines.

Going For Gold was shot in Adelaide with an Australian crew and largely unknown and non-professional cast. The exception is the American import Berglund (Raising the Bar), who is actually a dancer and gymnast. And despite her best efforts to bring a hint of authenticity to the material she is let down the amateurish nature of the production and the lack of budget.