The Glass Castle is the film version of a true story that will baffle you. A film that balances between a romanticised comedy and a serious drama. It’s like an adventurous road-movie in which an apparently normal family travel around as nomads. But “apparently normal” is an understatement, because they lead a rather unusual life. And this is thanks to Rex (Woody Harrelson), the pater familias of the Walls clan. 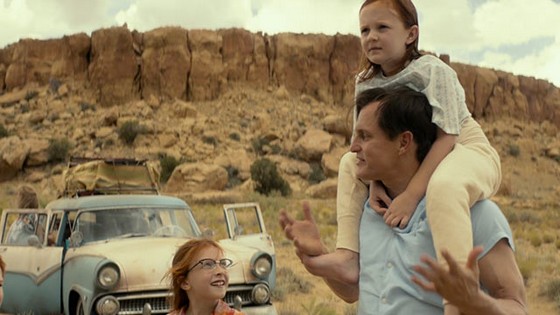 On one hand he thoroughly hates everything that smells like capitalism. And on the other, there’s a serious alcohol problem that causes a number of problems. Rex is an addicted man with manic-depressive traits. He’s been planning already for years to build a dream house in the most efficient place (an argument that he uses over and over when they’re moving yet again). This plan involves a futuristic glass house. A house probably as fragile as the family structure in which Jeannette (Ella Anderson; and Brie Larson) grew up.

Rex is without doubt an intelligent person, but has never used this intelligence in a positive way. Hence the chaotic life with a different destination every other time. From a poor home to spending the night under a starry sky in the desert. Rex and Rose Mary (Naomi Watts) are parents who feel responsible for the welfare of their children, but on the other hand they can not bear that responsibility. Rose Mary is a would-be artist with a hippie look who follows Rex unconditionally and goes along with his illusions. Even though she realizes at certain moments that they aren’t exactly leading a normal life, it’s still very difficult for her to leave Rex. Sometimes she acts as if she’s intoxicated as well.

The Glass Castle contains some heavy themes such as parenthood, addiction and its consequences, rebelling against established values in a capitalist society and psychological child abuse. Even though it sometimes feels absurd and light-footed, the whole left an everlasting impression. The Walls have a family life with well-meaning parents who make everyday existence almost impossible. I haven’t experienced similar circumstances. But the addiction element is something that touched me personally. It showed in a realistic way how someone’s dependency is destructive and how difficult it is to reverse such a process. Despair and guilt were played in a striking way by Woody Harrelson.

Harrelson plays his prominent role in a truly brilliant way. For me this was one of the best acting performances of this versatile actor till now. Brie Larson shows in a realistic way how the older Jeanette struggles with her inner feelings. There was this turnaround moment when she realizes that she doesn’t belong to the artificial world of the wealthy people and that the imaginary world of her father, she wanted to escape from so desperately, was the place where she felt at home. Perhaps it’s a bit too corny, but at the same time it’s really touching. The one who made the most impression, however, was Ella Anderson as the young Jeannette. The interactions between Rex and the young Jeannette were the most beautiful film moments. The father with his changing moods opposite that vulnerable girl whose unconditional love for her father is indestructible.

Even though it’s not explicitly about alcohol, I think this is a common thread throughout the film. I’m convinced that alcohol is the structural cause of the totally disrupted family situation and the reason for all kinds of incidents. Rex realises that his family doesn’t get the regular life they actually deserve because of his drinking problem. And when his favorite daughter asks the ultimate question to quit drinking, there’s that pained and guilt-soaked look. Most will see this as irresponsible. But remember that an alcoholic is trapped in a hard-to-flee compulsion pattern and most of time doesn’t have control over his behaviour. However, I fear the film isn’t a reflection of how the situation would be in reality.

The Glass Castle is now available on DVD and via on-demand services.